This one has been a long time coming.

I found Horizon Chase enjoyable enough on my Android phone, I really did. But the minute there was news of this coming to PC and Consoles, I stopped playing. I tried getting my controller to work with the Android version, but never had much luck. And I really didn’t want to use the touch-screen to play. It was fine, honestly, but my memories of the raster-racers Horizon Chase was paying homage to was with a controller in my hand, not tap-tap-tapping on a touch-screen.

So I made a deal with myself.

As much as I wanted to dive in, I was going to wait it out.

I’d wait until I could experience Horizon Chase in its Turbo form with a controller in-hand. 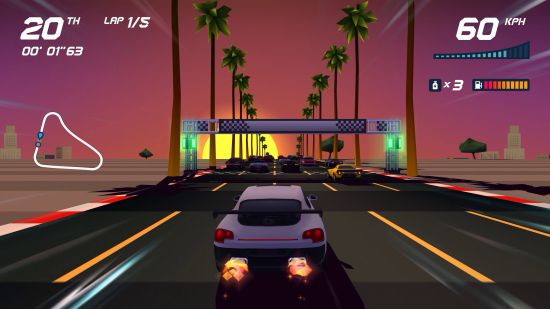 So, three years later, here we are. I’ve spent a fair bit of time with Horizon Chase Turbo, and I’m in love. I always knew I would be, but waiting this long to play the game properly could have set me up for disappointment.

I’m really happy to report it’s not the case at all.

Horizon Chase Turbo is out now on PC and PS4, and the experience is worth every second I waited for it.

Here’s a few quick things that make Horizon Chase Turbo an absolute must for retro-racing fans! 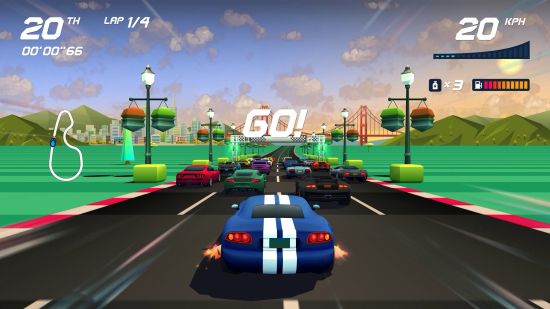 I don’t want to bore you with history. If you’re reading this, then there’s a damned good chance you know the classic 2D-but-3D Raster Racers that Horizon Chase Turbo draws inspiration from. This is a racer in the vein of Out Run, Lotus Turbo Challenge, Top Gear and Jaguar XJ220, with a bit of the 3D-but-similar Cruis’n USA thrown in there too. 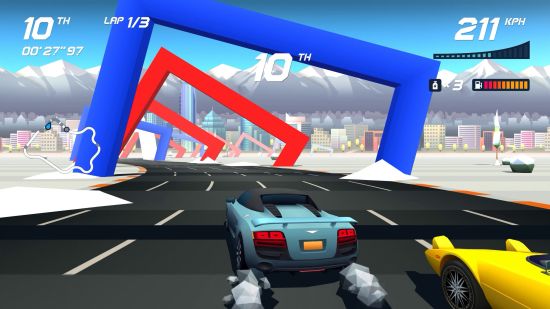 Horizon Chase Turbo brings back all that odd scaling, killer music, bumper-car collisions and tight controls and updates it to 2018 standards.

This is 100% pure, unadulterated arcade racing that is so fast, it gives WipEout and F-Zero a run for their respective monies. 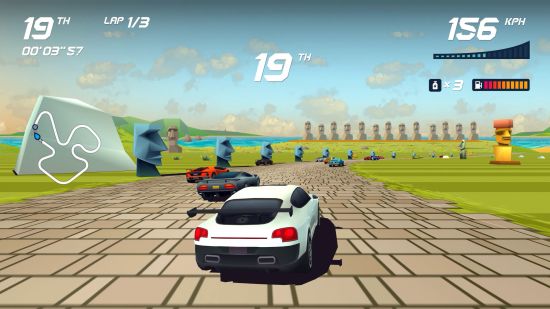 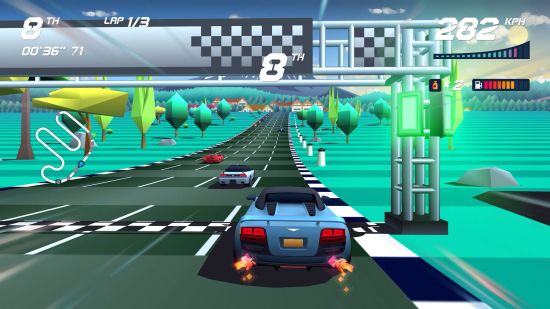 Horizon Chase Turbo wouldn’t be half the game it is if it weren’t for the frankly slavish attention paid by Aquiris Game Studio to the feel of the racing. The roads scroll in exactly the same way as the racers of old, with smooth road gradients and sudden elevation changes and turns. It just looks right. Or wrong, depending on your level of tolerance to the quirks these old raster-racers exhibit. 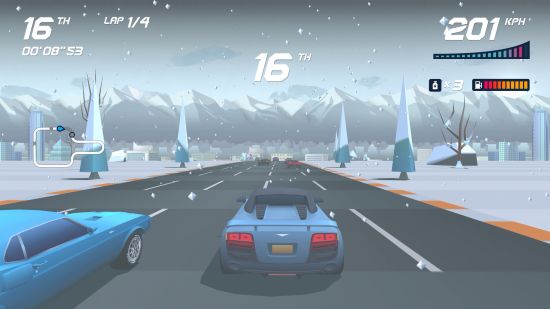 The controls are bang-on too. This is arcade racing in it’s most distilled form, and vehicle control is as responsive and tight as could possibly be. 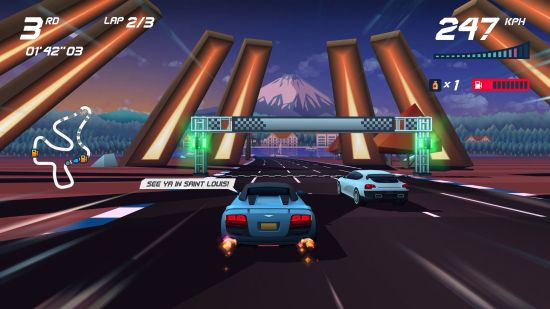 Horizon Chase Turbo features a large roster of crowd-pleasing cars that are fun to play around with. Although they all have different stats, they’re not worlds apart when it comes to controls. Some will corner better, some will fly off the starting line like lightning, and others are speed-demons, and will have you overtaking AI drones like a beast on straights. It’s basic stuff, but the variety in handling is much appreciated. Some cars will suit certain courses better, and I find myself switching vehicles on a regular basis. For varieties sake and because that one course with all those crazy turns might just be too much for my current vehicle to handle. This is where the consistently excellent controls really make all the difference, as jumping between different vehicles is not a painful experience. You’ll get the hang of that new car after a lap or two. 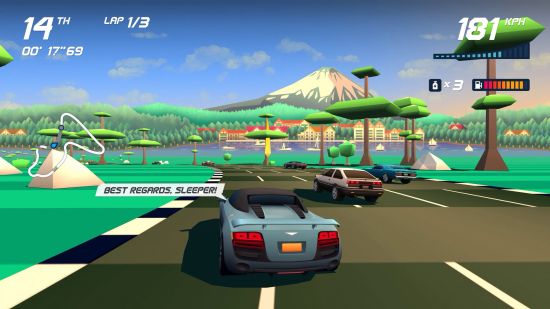 I’ve seen people knocking the visuals in some Steam discussions. I really want to know what they’re smoking, because the game looks fantastic!

I have a feeling that this sentiment is being thrown about purely on the grounds that Horizon Chase was a mobile game first, and a PC game second. I love the use of colour here – each and every track looks different from the last, and the low-poly aesthetic is stunning. The sharp edges and smooth shading make for a game with some crazy-good image quality – Horizon Chase Turbo is as sharp as a tack. 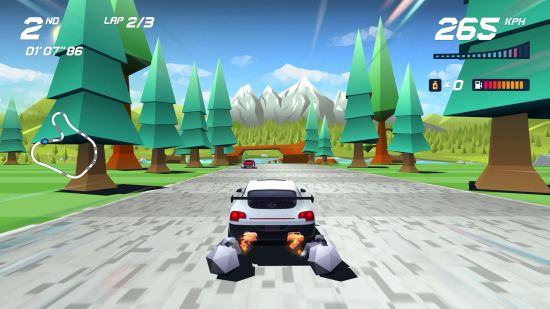 Performance is just as consistent. The game has no frame-rate cap, so it’ll run as smooth as your rig and monitor will allow. And let me tell you, the highest quality settings with 8x AA at 165 fps? Beautiful.

The music is just as amazing, with those sweet, sweet Barry Leitch tunes fitting the racing action perfectly. Don’t believe me? Check this out:

I’m only on the fourth set of stages (Brazil), but I’ve not raced a single track twice so far, barring my re-tries. 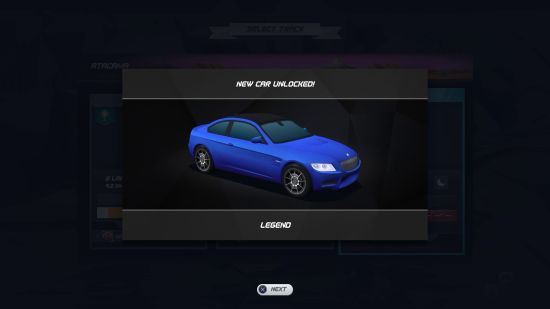 Each course has some blue chips scattered around them. If you want to Super Trophy all of these tracks, you’ll need to collect all of these AND come first. This is how I’m approaching the game, at least for now. I’ve completely cleared all the races I’ve won with Super Trophies so far, and I’ll keep doing that until it gets too difficult or frustrating to do so.

You’re rewarded with cars for 100%-ing stages, so it’s a worthwhile pursuit. 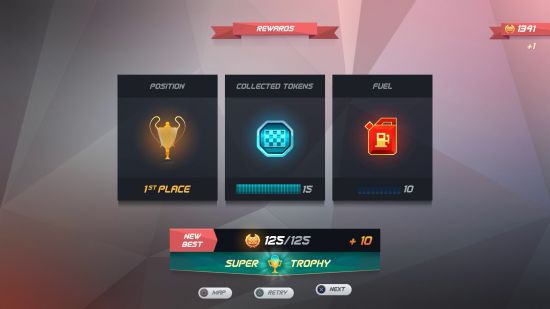 Bonus races are also available from time to time – winning these nab you stat-upgrades. And not only do these stat upgrades increase your car’s performance permanently, they’re applied blanket-style to all the vehicles in the game.

Hopping across the globe and taking on each country one by one is a lot of fun. It breaks the game down into managable chunks, so you can blow through them in a few sittings, or just take your time and play a bit now and then. Whichever way you want to play, Horizon Chase Turbo has you covered. 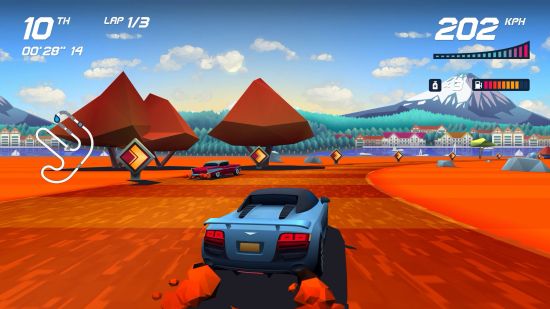 There’s also split-screen for up to 4 players total. No online at the moment, but I’ve never been much of an online-multiplayer kinda guy, so it doesn’t bother me too much. It might bother you.

I’m going to leave it here, because I’d like to review this some time soon, but if for some strange reason you’re on the fence about Horizon Chase Turbo, then know that it’s quality.

It’s a great port of a game that fully realizes its potential on the more dedicated gaming platforms. If you’re an arcade racing fan, it’s an absolute no-brainer. And even if you’re not, it might take you back to all those times you spent parked in front of your CRT television in the 90s.

Because that’s where I am.

I’m utterly hooked. I’m loving the variety, the vibes and the smooth controls. 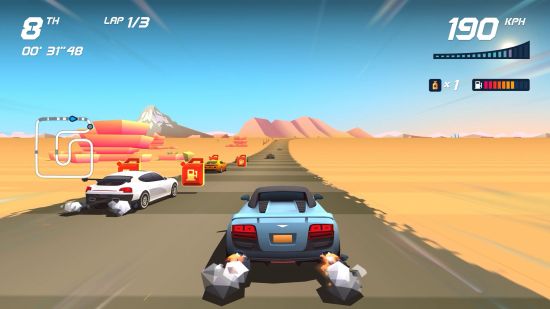