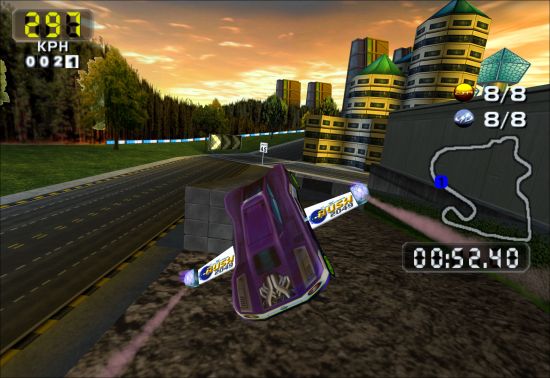 I’ve never been one for multi-player gaming. I put this squarely down to the fact that, barring the occasional couch co-op session, I don’t have a competitive bone in my body. So that’s out.

So what about JRPGs? Generally, they don’t do it for me either, although I really wish they did. With the odd exception or two, I can never find it within myself to take the stories they have to tell seriously, and my eyes roll at every bit of exposition-heavy dialogue. Scratch that off the list.

So when it comes down to games I play for the sake of playing games, yeah, you definitely won’t see me running to a multi-player FPS, or jumping into a Chrono Trigger or Final Fantasy game to while away the hours.

Instead, I’ve got a handful of different games that I know like the back of my hand, that I can either blow-over in a day, or delete the save file and comfortably start over at any time.

This will be a regular thing – a series in which I look at games that are my gaming equivalent of comfort-food. These are games that respect my time. Games with a special something, that despite having beaten 10 times over, I can’t help but revisit multiple times a year…

…and I’m starting with my absolute favourite… 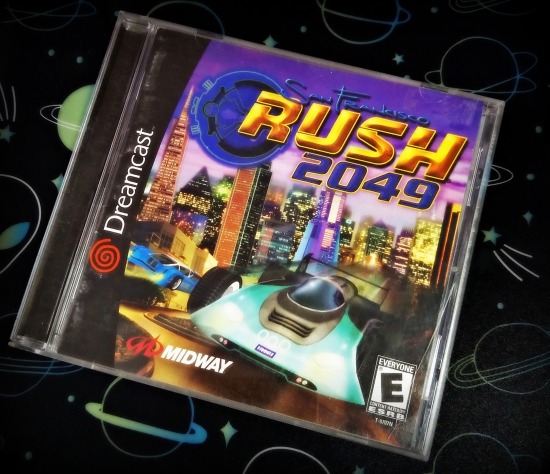 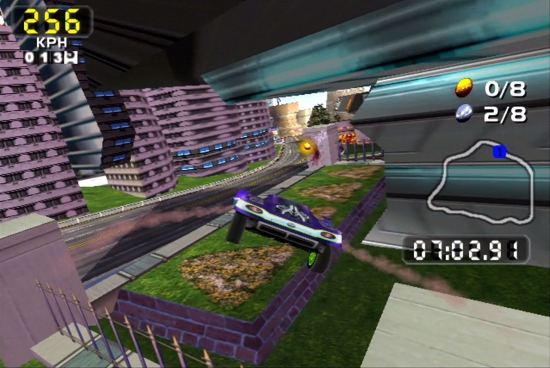 Out of all the Dreamcast titles that I could possibly play, the one I seem to crave the most is San Francisco Rush 2049 – it truly stands out as one of the crown jewels on the Dreamcast. 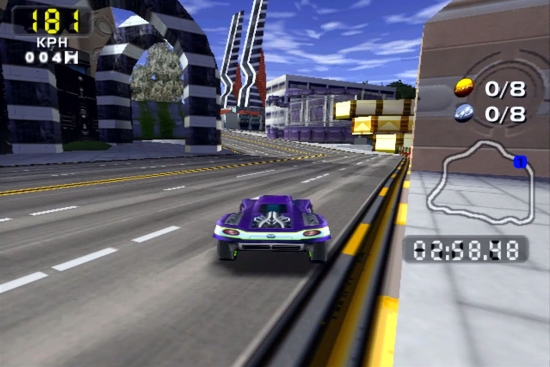 While the game also appeared on the Nintendo 64 (and PS2, Xbox, Gamecube, Arcade etc…), I can’t help but associate the game with the Dreamcast. Back in 2000, there really wasn’t anything quite like Rush 2049. As an arcade racer, yeah, it featured races, but they were always the least interesting part of the game.

So you’ve got your Arcade races. The main championship mode is fun, but mostly it’s just a means to an end – you’ll have to play it in order to unlock certain cars, tracks modes and performance upgrades. If you’re going to play RUSH 2049, and choose to only tackle the races, then you’re doing it wrong. 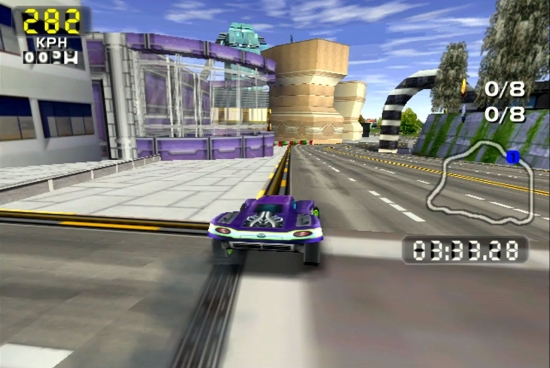 Much more interesting is the Stunt Mode, available right from the start. Brilliant fun, all told, and I’ll get to it in a bit. Elsewhere you have full-blown Battle mode for those who fancy a bit of Vigilante 8/Twisted Metal action, and a Practice Mode, which lets you explore the tracks at your leisure. Finally, there’s an obstacle course, dubbed The Gauntlet, which is a brutal run that will require an almost god-like mastery of RUSH 2049’s controls and systems.

SO where do I spend most of my time? In Practice and Stunt Modes.

More Than Just The Road. 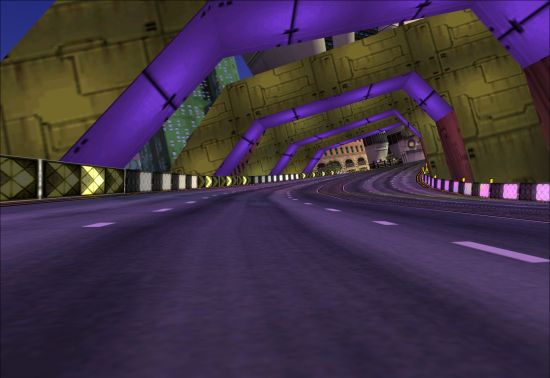 There aren’t too many traditional racing tracks in Rush 2049, but don’t be fooled. They are huge. And while you can lap them in the traditional manner, they extend far, far beyond the confines of the actual track. Hidden routes are everywhere, with entire sections of the track you’ll never see if you don’t go exploring – places like an underground metro on one of the tracks requires you find a hidden door, to which you have to travel through a straight tunnel before it opens up. And that’s just the first course.

The clever design would be for nothing if there weren’t anything to find, but Rush 2049 eggs you on in the best way possible. Each track contains 16 coins hidden in hard-to-reach places. The easier coins to nab are Silver, with the vast majority of the harder Gold coins requiring some serious air and gymnastics to reach.  Some are easy to spot, whilst others were either incredibly well hidden, and required actual effort to get to.

And this is why the Practice mode is so much fun – far from being just a simple time-trial, you’re free to tackle any jump you like, go for every coin that catches the eye, and find every secret area without the added distractions of opponents or a time limit. It’s almost like a platform game in that way – hell, it’s almost like a mini open-world kind of deal! 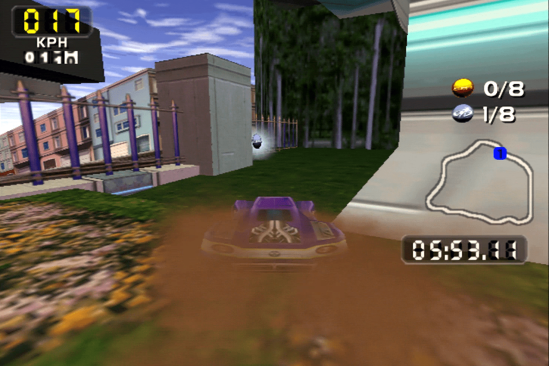 Some coins are ridiculously difficult to find. If they’re not hidden completely out of sight, then they offer you a teasing glimpse and beg you to nab them.

See this video here… a montage of all my failed attempts at one particular set of coins. I must have tried a hundred times or more to launch my car at just the right angle to fit into the narrow crevice where two coins lay waiting for me on the other side. I’ll tell you what, though, the moment I actually managed it is one of the best gaming memories I’ll ever have.

(This is the OG Xbox version too, if you’re at all curious.) 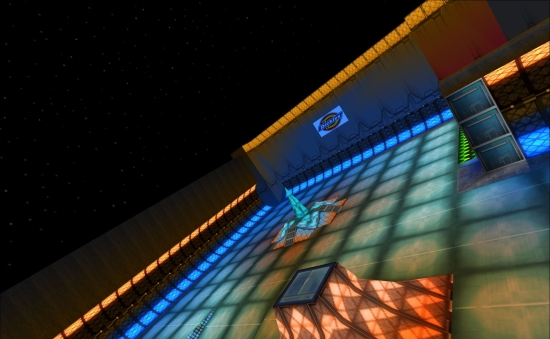 Stunt mode has its own arenas, completely separate from the racing/adventure courses. Full of jumps, ramps, tiered structures and mini gauntlets, it is the ultimate make-your-own-fun mode. Pick an arena, choose a time limit, and off you go. There’s no real objective other than to rack up as many points as you can, whilst grabing all the coins – yeah, they’re in this mode too! If you hit certain point milestones, you’ll unlock more arenas, which means new jumps, coins and a change of scenery. 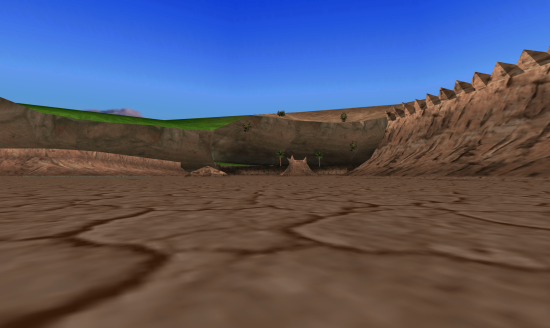 Now would probably be a good time to mention the robust physics system baked into Rush 2049 – it’s easy enough to get to grips with, but very quickly you’ll realise that you’re completely at the mercy of the game’s physics modelling. Especially if you get a bit of air, or take a corner too fast. 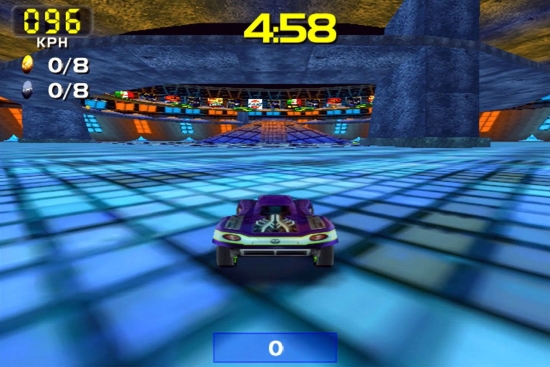 A good thing, then, that the developers saw fit to give each vehicle a set of retractable wings. Not only do they look cool, but you can choose to deploy them at any time – as long as you’re in the air. They won’t make you fly, but they do allow a certain degree of control – so for example, if I’ve taken on a jump at too much of an angle, I use them to level out before I hit the ground.

It’s also fun to just send yourself into a spin, and see how you fare when you hit the ground. You could explode into a massive fireball, or you could hit the ground at just the right angle to propel your vehicle into an uncontrollable bounce. Will you land right-side up? If you do, the game rewards you with points. 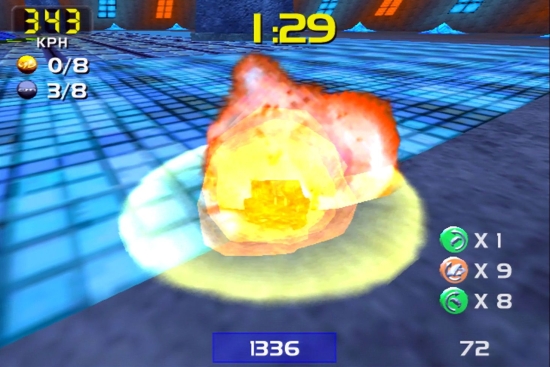 Stunt mode can be played in split-screen multi-player, and whilst there is a competitive edge to the proceedings – you’ll be trying to out-score up to 3 other friends – it’s wonderfully cathartic. 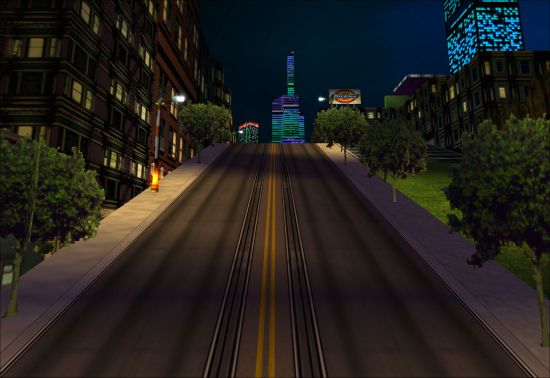 So which version should you play?

RUSH 2049 started out in the arcades, and was a little different to every port that followed. It was more of a racer, and the console RUSH 2049 is almost an entirely different beast, with a whole slew of new content and different modes.

Let’s start with the Nintendo 64 game. Developed in tandem with the Dreamcast title, RUSH 2049 on the Nintendo 64 is an amazing game, and a true technical show-piece for the platform. It runs at half the frame-rate and resolution of the Dreamcast game, but don’t let that put you off – RUSH 2049 is still one of the best looking games on the N64, with killer draw-distances, stable performance and some of the cleanest textures around.

You just don’t usually get this level of graphical fidelity on the old box… see here:

The Dreamcast game is the most refined version, at least in terms of the pure RUSH 2049 experience. There is more slowdown here than in the subsequent ports, but the textures and overall frame-rate beat the Nintendo 64 any day of the week, and you won’t get any of the later versions looking as sharp as the Dreamcast does via VGA to a CRT monitor.

Both the Dreamcast and Nintendo 64 games feature music tracks exclusive to both, so if you find yourself a bit of a fan, then purchasing both games isn’t too bad of an idea.

The PC, Playstation 2, Xbox and Gamecube ports, which you can find on the Midway Arcade Treasures Vol.3 compilation, feature the same higher resolution textures and 60FPS update found in the Dreamcast release. All are, by and large, fantastic ways to get in on RUSH 2049, but do lack some of the control customization options you’ll find in the Dreamcast original. The Playstation 2 and Gamecube ports are also completely playable via Emulation (as is the Dreamcast) and barring a few graphical glitches, they all look utterly superb in high res.

It’s worth nothing that the PC version tops out at a resolution of 800 x 600, with no current work around, that I could find at least. So if you’re wanting to run RUSH 2049 the highest resolutions possible, then emulating either the Playstation 2, Gamecube or Dreamcast titles are the way to go. 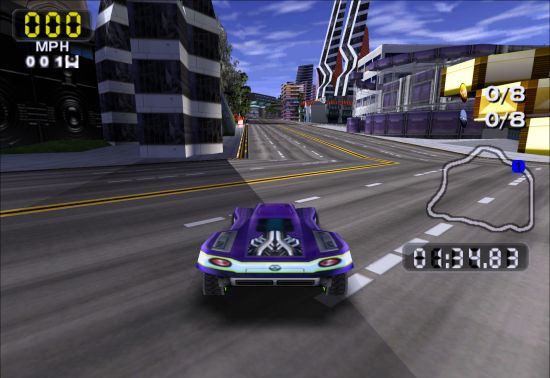 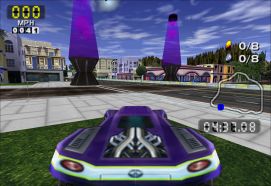 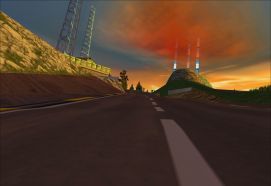 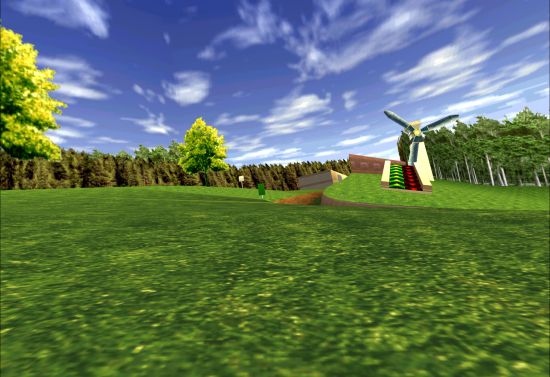 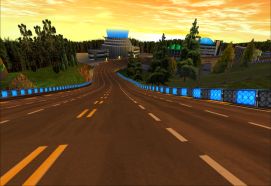 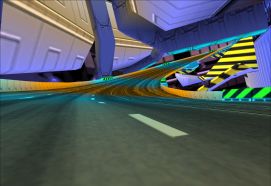 There really isn’t anything quite like RUSH 2049. I mean, there is – the previous RUSH games are great too, but all the additions and refinements made to RUSH 2049 make it the best version of the RUSH brand of racing. I love that the game rewards your curiosity at every turn, and in most instances, it allows you to do whatever you like, and at your own pace.

That it hasn’t seen a re-release in recent times is a crime. It’s unorthodox but unique driving physics hold up spectacularly in the modern era, and the game still looks really great, with bright, bold colours that you rarely see games exhibit any more, especially when talking racing games.

Either way you cut it, San Francisco RUSH 2049 is a game that absolutely begs to be played. Unique amongst arcade racers, it was a true evolution of the genre that somehow managed to fade into obscurity.

People just don’t know what’s good for them, that’s all I can put it down to. 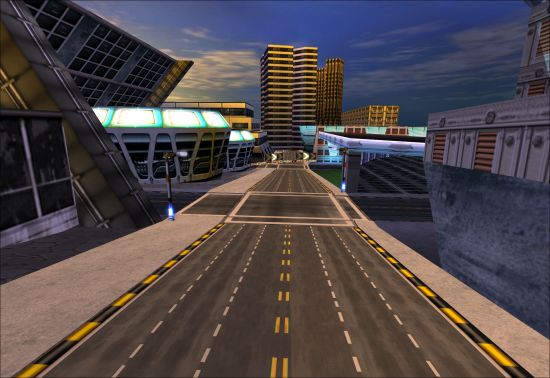