When it’s hyped, sold and released as a full game.

I found the Alpha Demo of Apocryph really enjoyable. It wasn’t an amazing experience, but the core of something really, really fun was most definitely there. So much promise, so much potential, yada yada yada.

So it pains me to tell you that the full release of Apocryph is frozen in time – that same potential, the same promise – there’s still only that and not much more. 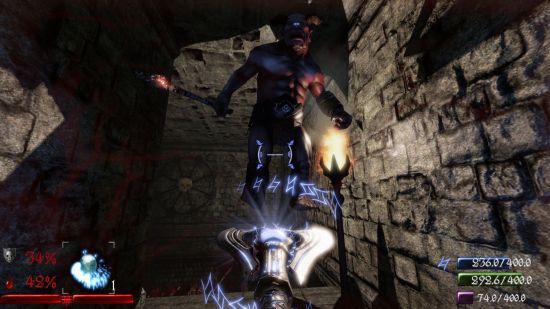 First up, I’d like to apologize to you all for my recommendation of the game here. In my defense, I was going off a one level Alpha Demo, and I played and enjoyed it a whole lot. Had Apocryph built on the foundations here, then we’d be laughing.

But as it turns out, all that Bigzur Games has done between then and now was to extend the foundations out further and then forget to build a house on top.

To say I’m disappointed is an understatement. I’m not usually a negative Nancy. There is enough shit going on in the world and I don’t want to add to the noise.

In saying that, I feel that I should stop those who are tempted to jump in on the game, because as of right now, you’re not getting what you’re paying for, and I can’t help but feel that something really shifty is going on behind-the-scenes.

I really want to give Bigzur Games the benefit of the doubt here, because there is an overall vibe in Apocryph that is genuine. The game aspires to pay tribute to classics like Heretic and Hexen, and you can almost feel the love the devs have for the games. But something about this whole thing just doesn’t add up. 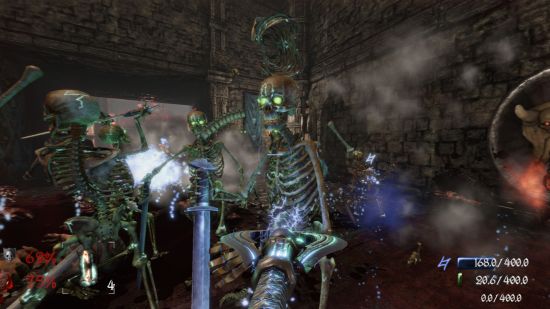 Bigzur Games announced the release of Apocryph a few days ago, and release it did. What they DIDN’T say was that this was an Early Access release. For $20, you’re getting only a handful of levels.

This is a problem, because Apocryph has been released as a FULL GAME, and NOT an official Early Access release. It’s still effectively an Alpha.

Can you gleam from this Steam write-up that it isn’t a feature-complete product? 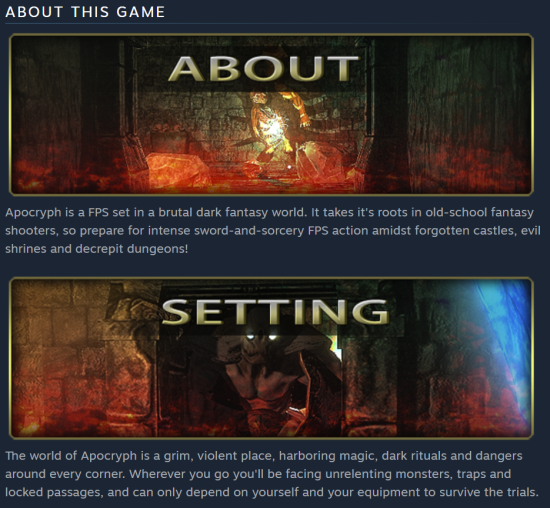 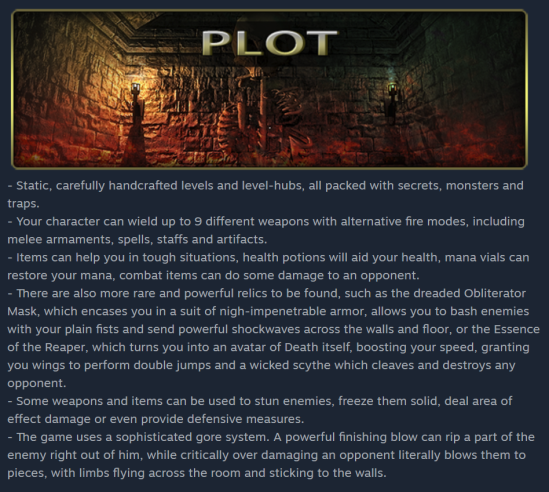 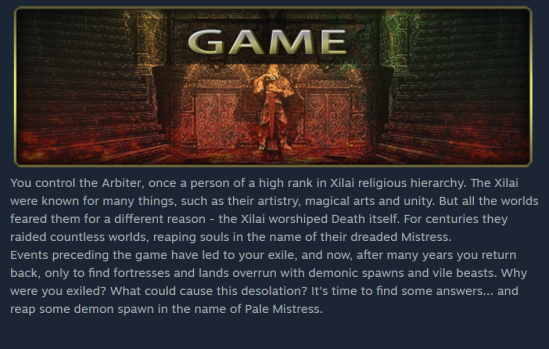 Some have questioned this in the Steam forums, and got a response, saying that a ‘free’ update in May is coming to everybody who has purchased the game.

Except it’s not really free, because we’ve already paid for a full game.

I feel that this is entirely disingenuous of Bigzur Games. If they had released the game to Steam Early Access, I’d have bought in straight away and supported them.

I’d have known, going in, that the game was unfinished.

But they didn’t. Whether it’s a benevolent language-barrier-thing or something entirely more sinister, Bigzur Games haven’t been entirely honest either way.

Even their wording in a follow-up post – after the release, of course – is misleading: 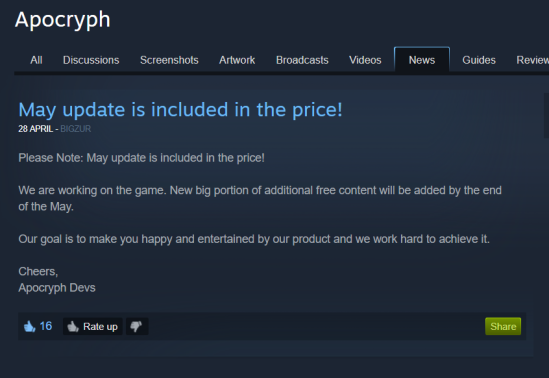 “New big portion of additional free content” seems to suggest that the next update will still not contain the full game.

Which would be totally fine if this was marked as the Early Access it really is.

Let’s count the ways in which Apocryph isn’t feature-complete. 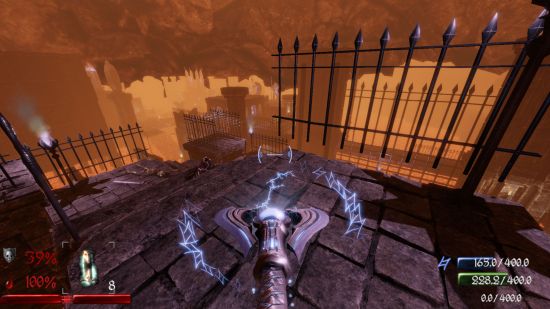 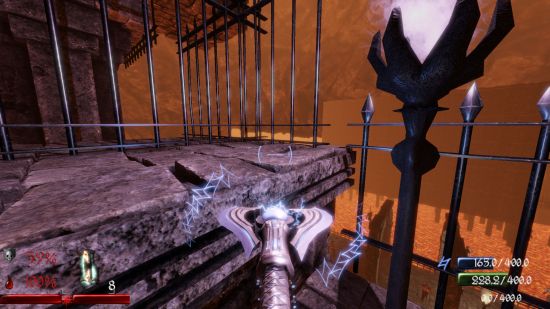 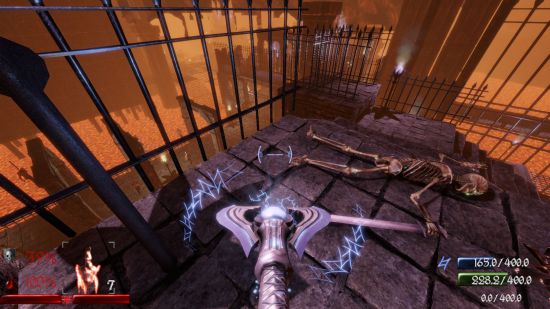 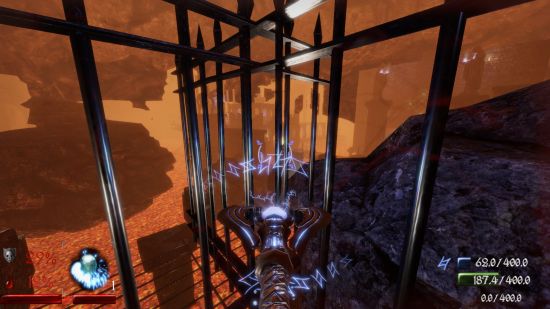 After the first stage, which is generally OK in my book, the level design takes a big nose-dive. These environments just don’t feel like tangible places – they’re bits of geometry stuck together and given a theme. “Carefully hand-crafted” is pushing it. Cobbled together would be a more appropriate description.

Which is a big shame, because the essence of the game, the combat and movement, is actually quite a bit of fun. Barring the bizarre omission of a crouch button, Bigzur games have at least the core components down, but with the poor performance and technical issues, lack of content and questionable release strategy, it doesn’t amount to a whole lot.

Apocryph isn’t a finished game, if that isn’t abundantly clear to you by now.

I’ll be keeping an eye on the game to see how it comes together, but I’m not holding out for a miracle. Bigzur Games have started this whole thing off on the sourest of notes, and it’s going to take a lot for them to change my stance on this mess.

When the ‘free’ May update goes live, I’ll be there on the front lines. 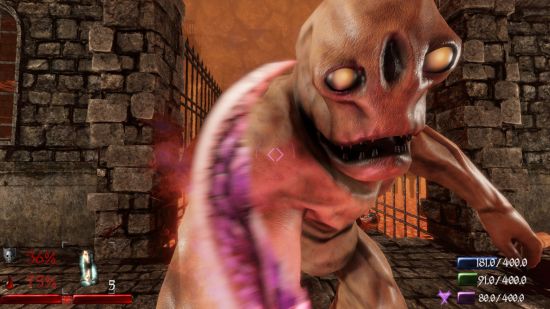