Every now and then, a game comes along that takes your breath away. I picked up Ninja Theory’s ENSLAVED: Odyssey to the West on launch day, and my first run through the game was on the Xbox 360. I played it from beginning to end, and thoroughly enjoyed myself. It’s a shame more people didn’t do the same, as the game sold rather poorly, and the only follow-up we got came in the form of DLC – a side-story that I’ll admit I haven’t played too much of yet. This is a review of the main Enslaved portion. I’ll be reviewing the ‘Pigsy’s Perfect 10’ DLC at a later date – watch this space. This is a review of the PC port that followed a few years later. I saw it sitting there in my Steam Library a couple of days ago, so I decided that a re-play was well overdue. 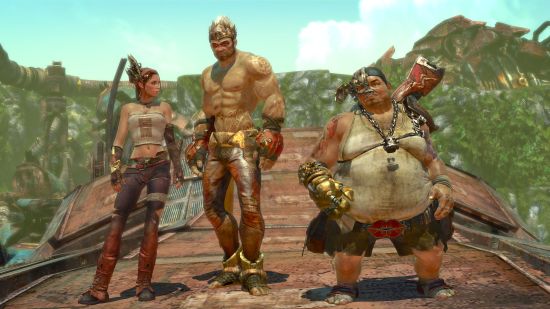 I distinctly remember rumours back in the day saying that Enslaved: Odyssey to the West began life as an idea to have a movie done within the confines of the then-cutting-edge Unreal Engine III. The developers Ninja Theory assembled an all-star team, with the likes of Alex Garland and Andy Serkis on-board, but the movie-concept was eventually scrapped. How accurate my memory is of this particular nugget of information? No idea.

I could have dreamed the whole thing.

Regardless, Enslaved is a piece of interactive fiction done right. It’s no secret that the game is a re-imagining for the classic Chinese story ‘Journey to the West’ by Wu Cheng’en, with a modern post-apocalyptic sci-fi angle, and Enslaved maintains a razor-sharp focus on its interpretation of the story at all times. Any and all gameplay elements are in service of the overall experience – the platforming is similar to the Ubisoft’s Prince of Persia Trilogy, and the combat isn’t far off something like a third-person Devil May Cry, or its closest analogue, Heavenly Sword. You can’t really fail too hard at either though – Enslaved has a simple, intimate story to tell, and it wants you to see it through to the end. 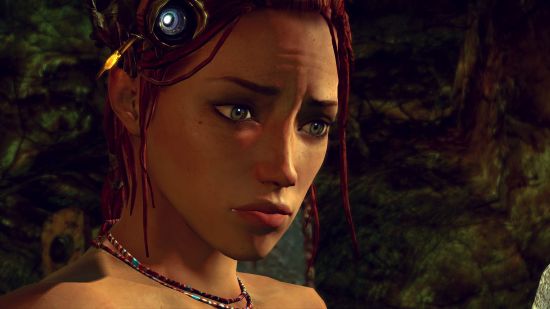 I won’t give you a blow-by-blow breakdown of the story, because I find that kind of stuff super boring. All you need to know is that you play as a man called Monkey, and you’ve been bound against your will by a woman named Trip. She needs you to get her home to her village and her family, and until you complete that task, your fate is in her hands. 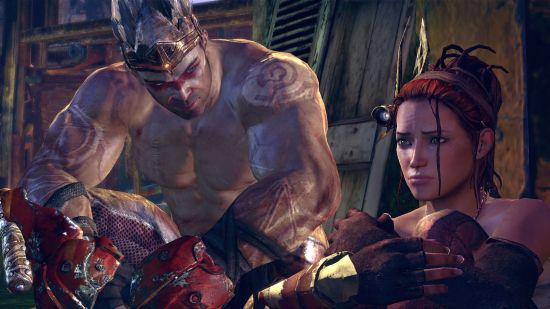 I wouldn’t blame you for thinking that Trip sounds like a pain in the ass, but the motion captured actors and the exceptional writing in Enslaved paint both characters with broad strokes – there’s no clear good or bad here, and both Trip and Monkey are flawed people who manage to grow a relationship, despite everything in the world seemingly stacked against them. You’ll come across another character, Pigsy, later in the game, and if you’re anything like me, then he’ll surely win you over in a matter of seconds. Providing some much-needed comic relief, Pigsy becomes an indispensable part of the team. 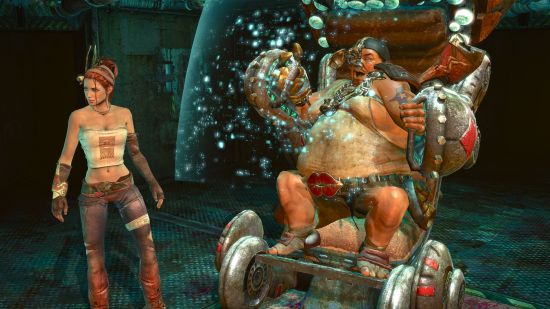 The world of Enslaved is gorgeous, and takes the ‘destroyed beauty’ aesthetic of games like Gears of War and showers it in all the colours of the rainbow. This is perhaps the most beautiful post-apocalyptic environment you’ll ever inhabit. Sure, there are countless Mechs and Robots wanting to destroy you around every corner, but just look at that scenery! 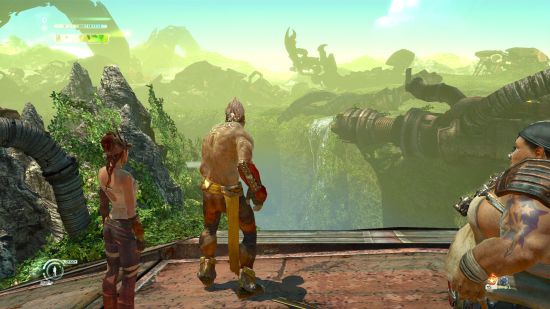 Each act of the story features its own colour palette, so as the story progresses and things get darker, you’ll be feeling it. No matter how much darkness comes to pass though, there’s always hope, and the colours of the world reflect this – even areas such as a barren desert and the innards of a Mech Titan are teeming with it. The game does show its age when it comes to environmental geometry and texture detail, but the art-direction hasn’t aged a day, and Enslaved is a world you’ll want to explore every inch of. I say explore, but Enslaved deftly funnels the player down a pre-determined path. Areas can be large and expansive, but there’s only ever one way through, and the linear nature of the game is something that will strike you fairly early on. Some may be turned off by this, but in 2018, I found it refreshing. 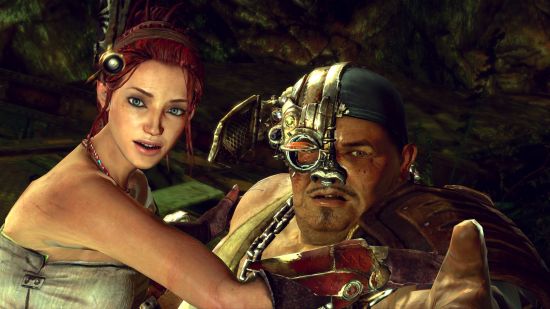 Just as impressive as the environments, and maybe even more so, are the animations. Trip and Monkey still look incredible in the here-and-now. Ninja Theory banked hard on motion-captured animations for both the movements and facial expressions, and it paid off. The facial animations are still some of the best around, and in my opinion, have only really been topped by Ninja Theory’s own Hellblade: Senua’s Sacrifice. Every line of dialogue is delivered perfectly, and coupled with the glorious writing and the mo-cap, each character in Enslaved is utterly convincing. Andy Serkis (Monkey), Lindsay Shaw (Trip) and Richard Ridings (Pigsy) and will leave you hanging off of every word. There’s also no dead-eye shenanigans here, no real uncanny valley stuffs – just amazing performances that sell the fantastic story. Everything in Enslaved is stylized just enough to avoid the constant comparisons your brain usually makes with reality in situations like this. 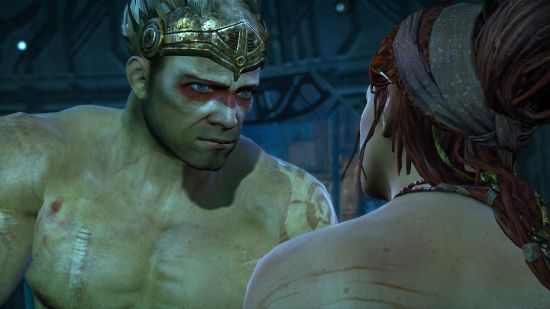 I’d be remiss if I didn’t mention the utterly fantastic music – Nitin Sawhney creates a score worthy of the Odyssey in the title. Understated when called for, but dramatic and moving when it needs to be, the orchestral elements are nice, but are taken to the next level when paired with the occasional electronic elements. Gorgeous, and well worth listening to outside of the game.

And this – this is No Death In Love. Tell me that this isn’t the greatest, most classy credits theme you’ve ever heard… 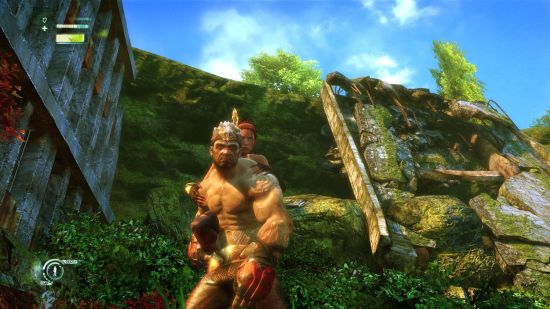 So, that’s the aesthetics, audio and story covered. But how does it play? Honestly? Pretty damned great. Since you’re at Trip’s mercy, the game is essentially one, long escort mission. Except it isn’t horrible. It’s more like team-work than baby-sitting, and though there are select moments where you’ll have to look after Trip, most of the time, you’re free to do you’re own thing, within the confines of the story, of course. 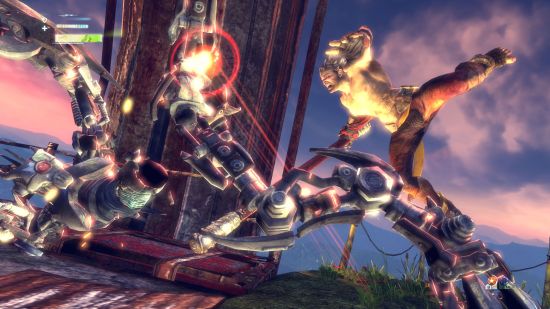 There are about a million-bazillion different Mechs infesting Enslaved’s levels, and you’ll be beating the ever-living shit out of them between set-pieces and cut-scenes. Platforming in the game is, as I’ve mentioned, pretty basic, but as a simple diversion from beating up robots, it’s ‘aight. The combat (and occasional environmental puzzle) is the meat of the game-play. 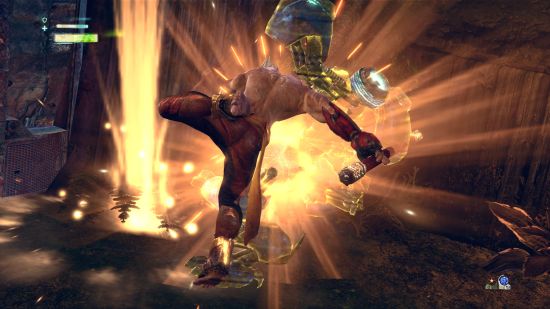 Throughout all of the stages, you’ll find tech-orbs everywhere. It’s worth exploring every corner of the game for them, because they act as currency for your upgrades. Upgrades can be made to your combat strength and combos, health, shield and more. Enemies also drop tech-orbs, so you’ll never really be in short supply of them. It’s a basic system, but a welcome one, and it adds some meat on to the bones of the game, and really balances out the story with fun, instant game-play. It’s not just button-mashing either, you’ll need to use some strategy to succeed. Some enemies are shielded, and require you break them down before laying the smack on. You’ve played the kind of combat that features in Enslaved before – it’s your garden variety two-button weak and strong kinda thing, with blocking and the occasional take-down to initiate – again, fairly basic stuff, but all-in-all, remains entertaining from start to finish. 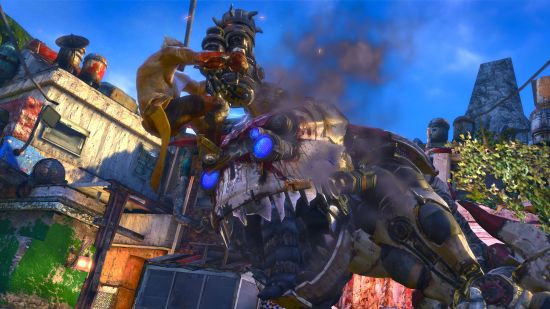 And there’s plenty of variety too. At certain times in the game, you’ll get to zoom around the environment on Monkey’s Cloud, and lemme tell ‘ya – it’s ACE. You only have access to the Cloud when the story calls for it, and I think that’s a great thing – it’s limited usage means it remains a novelty all the way through, even when the occasional boss-fight requires its use. 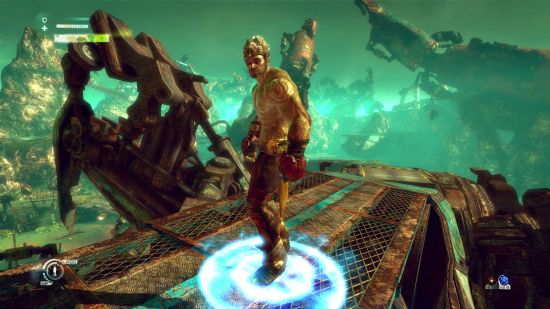 And that’s the great thing about Enslaved, it’s just a blast from start to finish, no matter what you’re doing in the game. The story is easy to get into, and will have you attached to the characters before long, but the game-play is just as engaging. Linear it may be, but the tech-orbs, fun combat and gorgeous visual presentation push you along, and you won’t need a lot of coaxing to arrive at the end-game – which is awesome, by the way. I really liked the ending, it’s just a shame we’ll never get a follow-up. I’d love to see what happens to these characters after the fact. 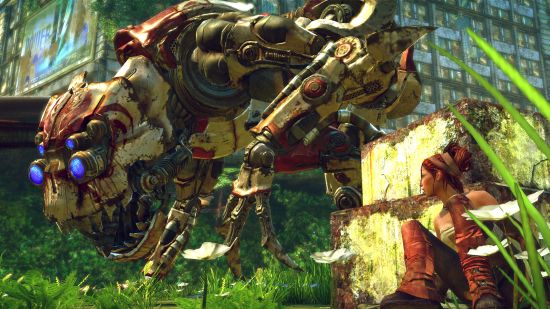 As a port, the PC version is pretty OK, especially for its time. Running in Unreal Engine III, Enslaved is easy to get running beyond intended specs with some .ini tweaks. Be aware though, upping frame-rates – like I did – results in some path-finding bugs on occasion. I got stuck in Chapter 13 for a fair while, and after a few re-tries with no luck, I restored the original .ini settings and it fixed the problems I was having. Once past the trouble-bits, I just changed it back. Still, seeing the game run in super high-res, with forced anti-aliasing and 165 fps? Magic. It was worth the few glitches I encountered. 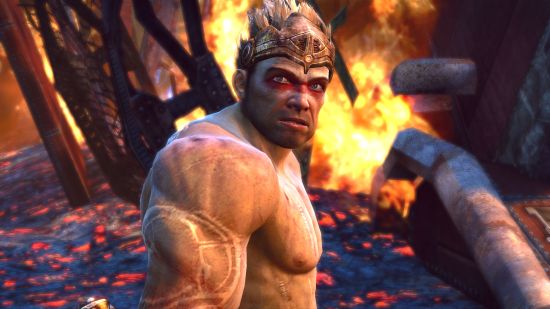 And whilst I can easily recommend this to PC gamers, the game is still worth playing on the Xbox 360 and PS3, if you’d prefer to take that route – it’s a great game, regardless of platform. 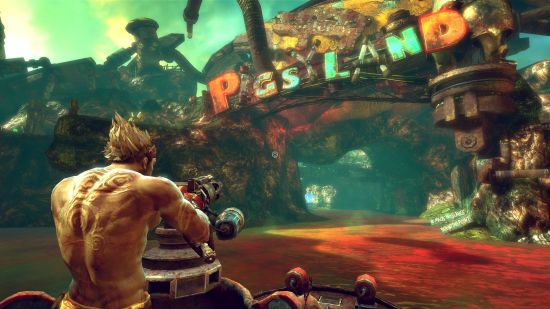 Everything is balanced perfectly, and the 10 hours it took me to complete the game this second time felt just right – I knocked it over on a day off work, and couldn’t put it down. Again. I remember really liking it the first time around, but this second play-through has put it right up there for me. Enslaved really is every bit the Odyssey that the subtitle hints at – it’s a story that spans not only great distances, but it’s a deeply personal journey for all involved. Each character is figuring things out together, whether they like it initially or not, and they come out the other side changed people. 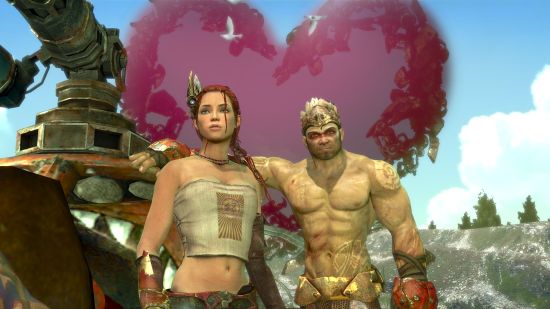 If you’re after a killer story told with class and restraint that just happens to have a fun game attached to it, then Enslaved: Odyssey to the West simply can’t be ignored. Brilliant stuff – get in on it. Better late than never, I say.

I’m still working on a scoring system, so bear with me – I’ll change this to reflect whatever system I end up using at a later date.

Ninja Theory have created a game that fully realizes the potential video games have to tell great stories. Every element is measured, tasteful and engaging all the way to the end, and it’s an utter travesty that it sold so poorly. The easiest 10 I’ve ever given out. 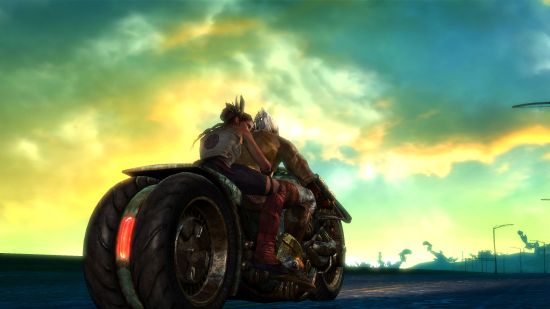 Have you played Enslaved? Do you rate it as highly as I do? Lemme know down below!