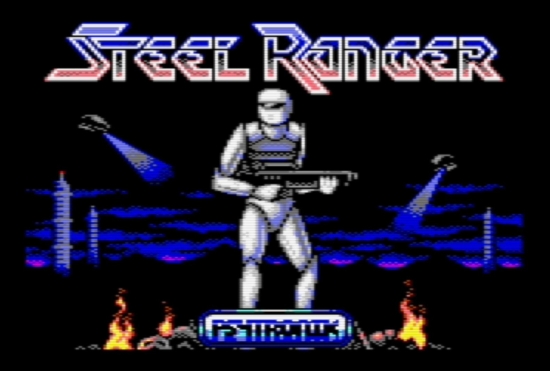 I’ll be taking a look at each of the brand-new Psytronik Software Commodore 64 games in time, but I’m starting here, with what is quite possibly my favourite game of 2018 so far – Steel Ranger.

Developed entirely by Lasse Öörni and published by Psytronik Software.

The Commodore 64 is one of those systems that I have always coveted from afar. Well, kinda. As a kid, a neighbour of mine had one, and I relished every chance I got to play it. I did have a VIC-20, and I loved that thing, but it mysteriously disappeared a few weeks before I got my first Mega Drive for Christmas…

As an adult, acquiring a Commodore 64 is always in the back of my mind. I’m constantly telling myself I should get one, get ready to pull the trigger, and then I see the prices they command and I shy away.

Well, no longer – 2018 may just be the year I get a Commodore 64 to call my own, and it’s all because of Psytronik Software and their recent release of Steel Ranger.

Now, I’ll preface this by saying that I have not finished Steel Ranger yet. I’m about 2-3 hours in – I think – and I’ve uncovered what seems to be a good chunk of the map so far. 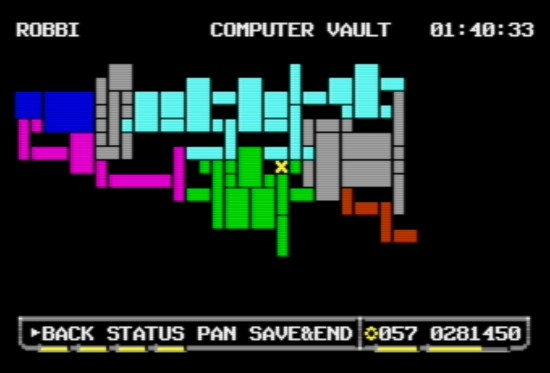 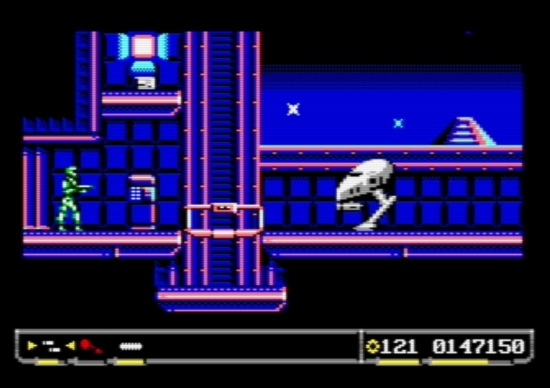 It’s all futuristic Terminator-style Cyberpunk – muh weakness – with elements of Turrican thrown in there for good measure. And because of that heavy 80s vibe, I configured VICE to use the external C64S alternative colour palette. Purists may balk, but I don’t really care, and because I’ve got the option, I’m gonna crank those saturated colours as hard as I can. Nothing screams ‘THIS IS THE 80s’ more than neon does!

Steel Ranger, then, is an amalgamation of everything that has gone before. It doesn’t do anything too different, and it doesn’t re-invent the wheel.

And that’s exactly why I love it so much. 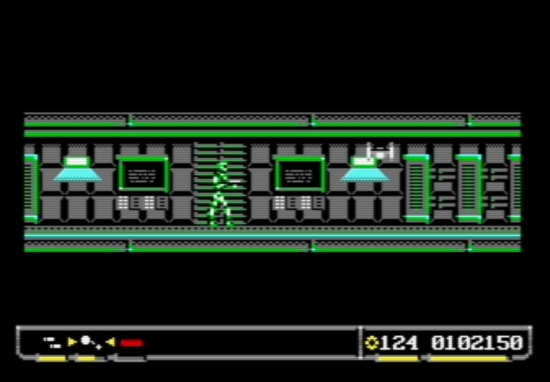 Steel Ranger is one of the most competent, unpretentious games I’ve played in a long, long time. It does what it does with such measured precision and grace – the pacing is superb, the shooting action extremely satisfying, and the level design is right up there. 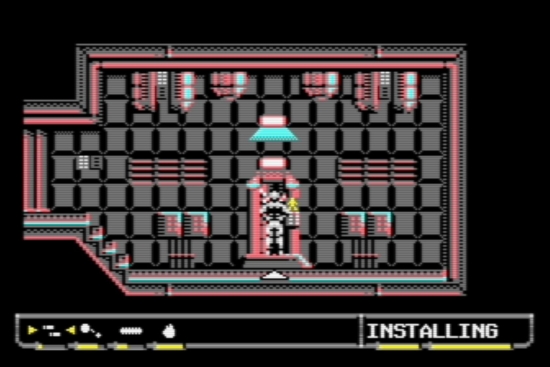 Now, usually when it comes to the Commodore 64 and Amiga, if I can avoid using Up to Jump, I will. If I’m playing via an emulator on my computer, I’ll use something like Joy2Key to change it up so that Up is a face-button, and I have that in addition to the Fire button – it’s what I grew up with, and it’s what I’m used to. However, this game got me wanting a Commodore 64 so bad that I ended up foregoing that routine. Steel Ranger uses Up for Jump, and though I could have fixed that, I didn’t really want to. For one, if I want to take a good, proper dive into the Commodore 64 library on real hardware in the near-future, I’m going to have to make peace with the fact that I’ll have to contend with control schemes outside of what I’m used to. But even so, being slightly out of my comfort zone, the platforming in Steel Ranger is great! I rarely ever missed a jump, and aiming my fire at the enemies I wanted to was a breeze. It feels like a long-lost classic, but better, because it has years of general genre-refinement to learn from. Tight as hell. 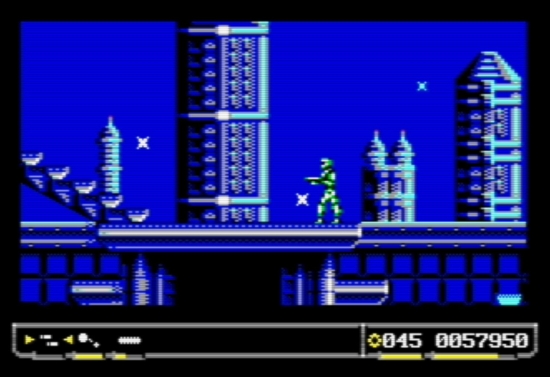 Complimenting the superb player control is the super-smooth scrolling. The frame-rate in Steel Ranger never falters, no matter what is happening on the screen. It feels like heaven to play – everything feels perfect.

The story in the game, well, it’s there. I can’t really tell you what it’s about other than there’s something to do with a ranger suit, and initially at least, you’re the only member of your team with one that works, so it’s you taking the first steps out into the world. But I don’t play games like Steel Ranger for the story. This is a Super Metroid-alike, and it’s all about the journey and the upgrades you find along the way. 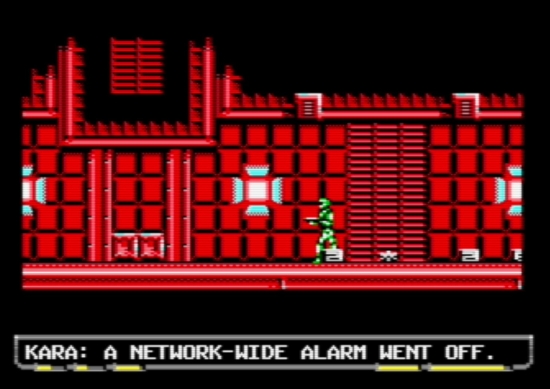 You start off with a basic machine gun, but it won’t be long before you’re packing a bounce beam, laser, flame-thrower and grenade launcher. You can switch between weapons with a press of a button, and barring the machine gun, ammo for each is limited. You can collect ammo from downed enemies, no problem, but even so, the game encourages you to experiment with all your available fire-power. Some guns are better for some enemies, and sometimes you’ll have no choice but to resort to your basic machine gun, because you’ve gone a bit crazy on the shooty-shooty. Either way though, you’re never left without a means to defend yourself, and there are the occasional stations you’ll stumble across where you can top up on more ammo. 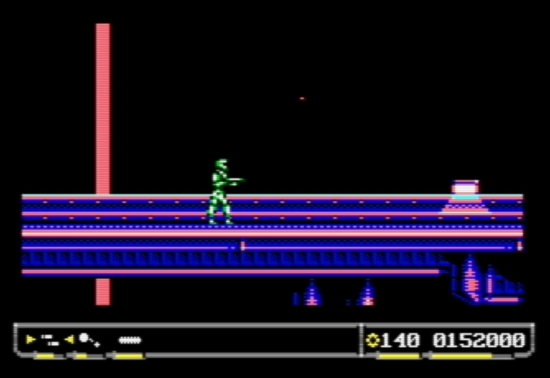 Your foes not only drop ammo, but they also drop scrap metal and the occasional health pick-up. The scrap metal is a resource, almost a form of currency. I’ve mentioned you can use it to refill your ammo by crafting the various ammo types. These don’t cost a lot of scrap, so you can usually go nuts with it. There are other recharge stations you’ll find throughout the map that allow you to upgrade certain aspects of your ranger. It’s pretty basic stuff, with upgrades available to your armour, your regenerating shield and your weapon power, but I like that it’s in there. These upgrades cost considerably more scrap than you’ll spend crafting ammo with, but it gives you something to look forward to and it makes backtracking almost a non-issue, because you’re constantly being rewarded for what you do. 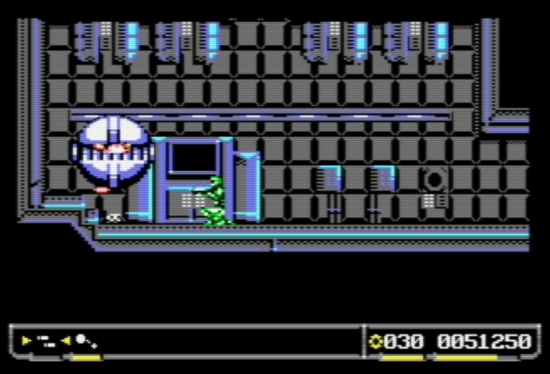 Since this is a MetroidVan… *cough* Super Metroid-alike, you’ll come across other power-ups too. These will give you different abilities, like being able to morph into a ball and drop mines (like in Turrican), and a higher jump that allows you access to areas that were previously out of reach. The morph ball is particularly neat, because it lets you blow up breakable walls, which in turn expose hidden paths leading to caches of ammo and health and alternate routes in the map.

Visually, Steel Ranger shines. It may not be the most detailed game I’ve played on the C64 (Sam’s Journey is pretty much the peak of visual splendour on the platform as far as I’m concerned), but it certainly is one of the most polished. The animation is superb, and every environment looks fantastic. There’s a cohesion in everything displayed on-screen that you don’t always see in these new-retro games. Every pixel the game pushes is put to the best possible use, and you’ll never be left wondering what you’re looking at. Steel Ranger is easy to read, the detailing is top-notch and as I’ve already mentioned, it moves incredibly smoothly. 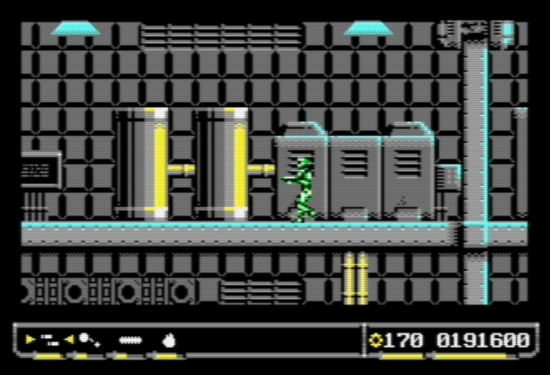 Special mention has to be made of the music. I’ve not heard a soundtrack in quite a while that entertains every melodic whimsy that I’m known to lust for. It’s catchy and upbeat for almost the entire run, only ever slowing down when something particularly nasty is going to happen and the mood calls for a little atmosphere. Aside from that though? Catchy AF. Every tune will drill into your brain like only the best of the best ear-worms know how.

The game isn’t much of a challenge so far, but that’s purely on me. I wasn’t sure what to expect, being a new-retro title and all, so I started the game on the Casual difficulty setting. And it is indeed, pretty damned casual. I was going to start over on Normal, but I decided that I’m going to see the game through to the end, and since it’s a cracker of a game, I’ll just start over and attempt all the difficulty levels once I’m done. 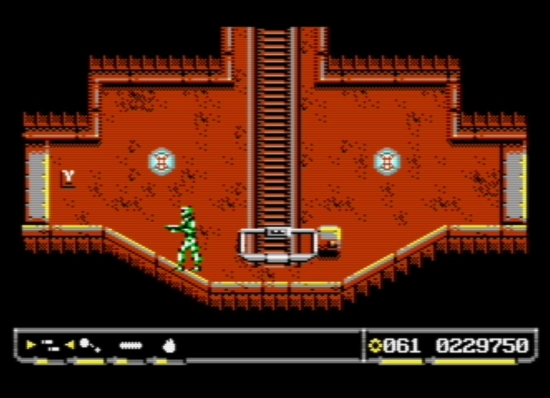 So if you’ve read this far, and you’re thinking ‘gee, all of this sounds like a bog-standard adventure platformer’, then you’d be half right. Like I said earlier in the piece, Steel Ranger doesn’t do anything new or different. It conforms to the standards and rules set by its forebearers.

But because the execution is so damned good, it doesn’t really matter.

Steel Ranger will scratch that itch – that hunger for this particular brand of adventure platformer. The brand of action that has you laying waste to a slew of enemies, doing some light platforming and opening up that giant map, all in equal measure. Games like Super Metroid and CastleVania: Symphony of the Night showed us just how potent this formula could be, and I’m happy to see games like Steel Ranger towing the line, on hardware that mostly pre-dates the sub-genre, no less.

I’d criticize Steel Ranger, but I genuinely can’t fault the time I’ve had with it yet. It may end up being a touch too short, who knows, but even then, that would just add to the replayability for me, personally. 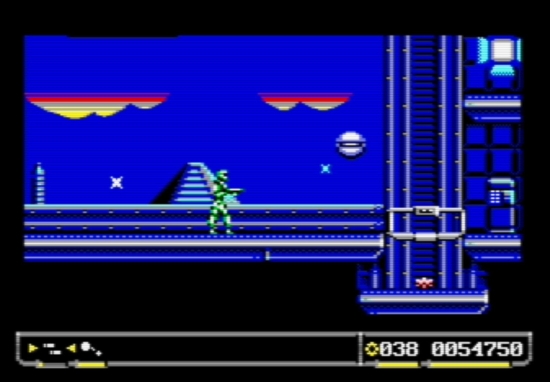 I picked up the game via the Psytronik itch.io store page for US $4.99, which made it AU $6-something. Yes, I have to resort to playing it in an emulator for now, but I know that my very first game for my legit Commodore 64 is going to be a physical copy of Steel Ranger.

I’m smitten, utterly smitten. Fantastic game, and I have absolutely no qualms about recommending it to anybody looking for another MetroidVania game to while away the hours with. 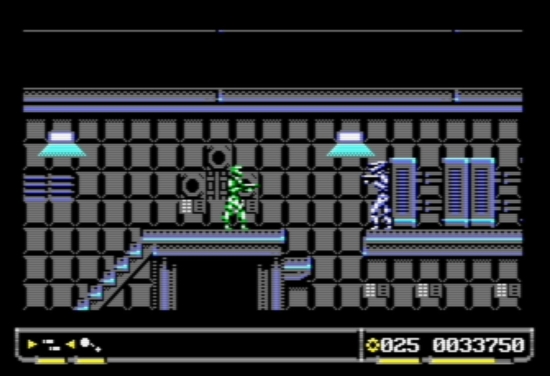