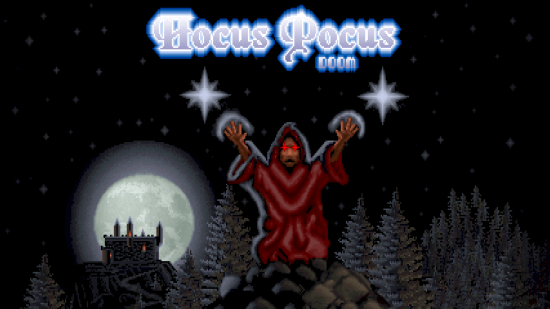 Even the title screen is the same!

The legs that id Software’s DOOM has had is incredible. Released in 1993, DOOM changed the gaming landscape like nobody could have predicted. Wolfenstein 3D was cool and all, and I personally love the game, but it didn’t blow my mind like DOOM did.

DOOM was the first game in which I distinctly remember feeling that the 3D environment felt like an actual place. I remember levels in my head like they are places I’ve visited on holidays. They have a sense of weight and feel tangible, full of memorable architecture and thoughtful design. If I could jump right in there, deep into those memories, I’d know where to go with nary a thought. 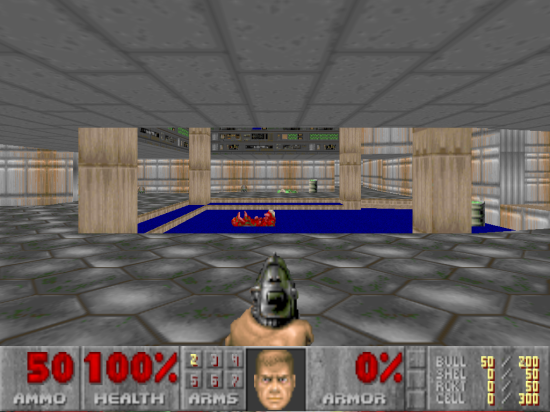 I don’t know how much of that is due to the DOOM engine being what it is, or if it’s down to the level design in the game, but whatever it was, it’s still there. It continues to draw people in, and the community surrounding DOOM is, if anything, more healthy and active today than it’s ever been.

A big part of this is down to the steady stream of user-created content – as long there has been DOOM, there has been DOOM mods. Using the freely available level creation tools, churning out your own levels is a relative cinch. These range from simple re-skins and remastered levels to entirely new systems and game-play focus. My first experience with a DOOM mod was Simpsons DOOM. It was the DOOM you know and love, with the enemies swapped out for Simpsons characters. I really appreciated that in the nineties – the sound bites were ripped straight from the show, and it was just a bunch of fun.

A lot of the mods in the nineties followed the same path. LOOK! It’s your favourite franchise – BUT DOOM! Aliens DOOM is another memorable one.

Source ports of the engine have played their part too. Without stuff like ZDoom, the multiplayer-focused Zandronium and others, the DOOM scene we know and love would be a different beast entirely. These ports allow the core-DOOM experience to shine whilst embellishing its bones with all the modern conveniences the contemporary gamer could ask for. You don’t have to put up with out-dated control schemes or lower resolutions if you don’t want to. If you do, that’s great, it’s still there for you if you want it. But I’ve seen the younger folk playing DOOM as if it were a new release. 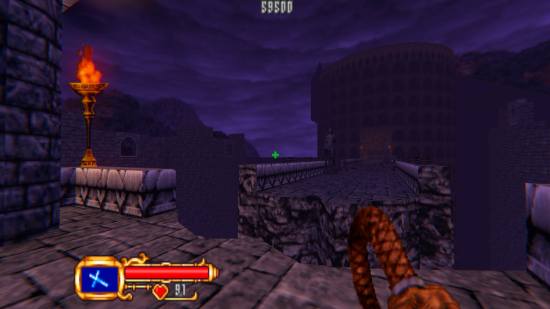 CastleVania DOOM is absolutely worth playing through.

But PC Gaming back then wasn’t just DOOM, even if it dominated homes and headlines. Thanks to Apogee and their Shareware model, playing the latest and greatest PC games was easy. Most games released their first handful of levels for free, and if you wanted to keep playing, you could order the remaining episodes directly through Apogee. And it worked! These generous demo’s were bundled with pretty much every PC gaming magazine you’d care to mention too, and CD bundles of hundreds of Shareware titles were everywhere.

A game that I always found totes cute – that’s a gee up, settle down –  was Hocus Pocus – a 2D platformer featuring a cute little wizard who’d traipse through a medieval fantasy Wonderland zapping critters, collecting orbs and solving simple environmental puzzles. The art style is still gorgeous, full of stunning colours that shouldn’t look good together, but do. It also had a lot of that Amiga-Chrome thing going on that I’m a total sucker for.

The soundtrack was killer too.

All told, it filled its niche on PC rather well. 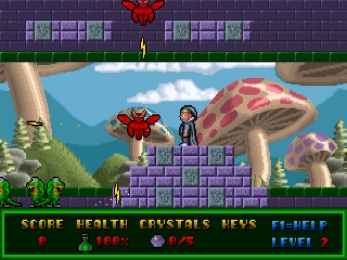 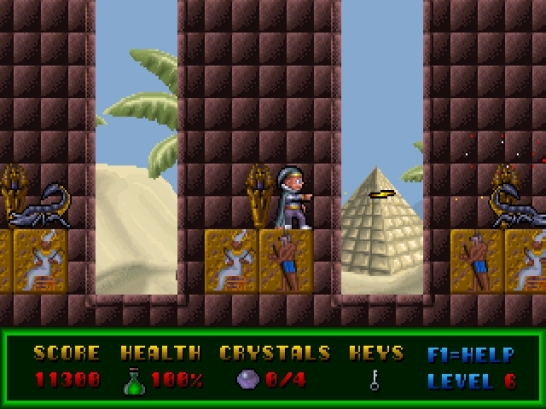 As fond as my memories of Hocus Pocus are, the game is perhaps best left in the past – at least in its original state. The scrolling is pretty choppy in 2018, and though the level design is still fantastic, it’s perhaps spread a little thin. There’s a lot of game in Hocus Pocus, but it’s all much of a muchness, really. Barring a palette swap and change of scenery every level or two, it feels like a slog.

In hindsight then, the Shareware version of Hocus Pocus was/is probably enough for most – it’s just too repetitive to whole-heartedly recommend to everybody but the most retro-of-retro gamers.

I do get the hankering for it every now and then, even today. I’ll boot it up, play for a few levels until I feel like I’ve had my fill, and then close the game.

I just don’t have the patience for its particular brand of repetition that I once did.

Even the title screen is the same!

This one caught my eye late last year. I’d stumbled across an article covering the then-recently released CastleVania DOOM mod. I love CastleVania, and I love DOOM, so I gave it a shot and was floored. I played it through to completion in two days, which is something I almost never do.

So I went on a hunt for more. And I found Hocus Pocus DOOM.

People in forums were singing its praises, and after reading a bit more, I was definitely intrigued. The screenshots looked fantastic – the gorgeous 2D tiles of the original Hocus Pocus were always my favourite bit, and seemed to translate into 3D space remarkably well. Truth be told, I thought this mix of Doom and Hocus Pocus bordered on minor genius – these two games generally occupied hard-drive space at the same time on the same PC, as was the case in my household.

Mashing them up is pretty much the ultimate nostalgia-bomb for a gamer of my persuasion.

And so I downloaded Hocus Pocus DOOM. I was fully prepared for that pretty nostalgia-bomb, but I expected that it would be short-lived, and I’d move on.

I wasn’t prepared for what is essentially Hocus Pocus 3D.

As it turns out, this isn’t just a mere mod. 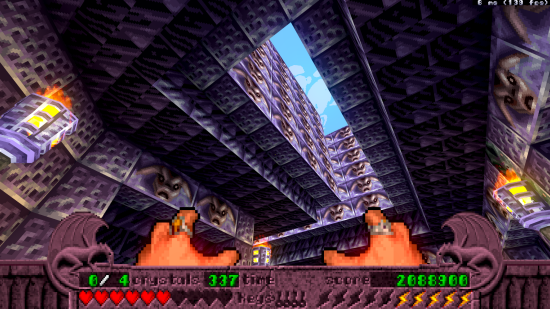 This is the original Hocus Pocus experience, considered carefully and adapted to the third dimension. Every element of the original is retained – it’s bonkers.

There is one exception though.

The repetition is gone.

So if you’ve got no idea what I’m talking about, and you are not familiar with the Original Hocus Pocus, allow me to bring you up to speed. The game-play loop essentially boils down to this: 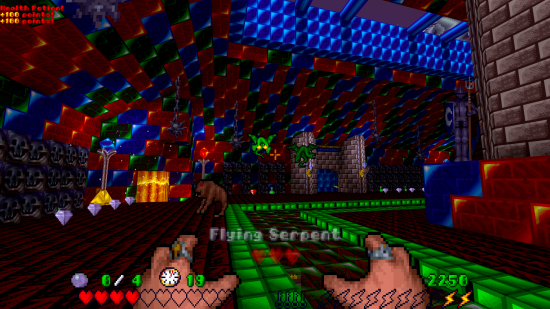 Hocus Pocus DOOM follows this to the letter – all the episodes and the environments they contain are present and accounted for. The story scenes are the same, the soundtrack is the same, the enemies are the same and all the levels are here (and more besides).

But it’s not the slog Hocus Pocus was.

This is largely down to how these levels have been redesigned. These feel like gamey kind-of levels, for sure, but they have that same tangible truth that the original DOOM levels had, except you know, all happiness and light. 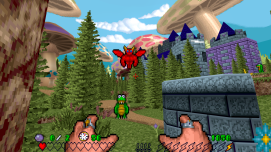 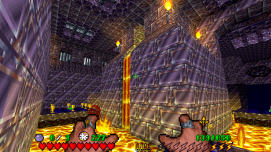 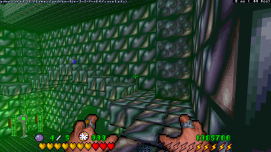 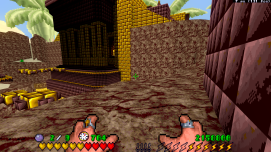 Each re-designed stage feels new and unique, with its own architecture and flow. OG Hocus Pocus changed things up visually, but the more things changed, the more they stayed the same. Not so here in Hocus Pocus DOOM. Every level has something new that you haven’t seen before. Some feel like dungeons. Others are more open. Some are mazes and others feel incredibly organic. Each environment does its own thing, and it keeps the experience fresh all the way through. There’s an artistry on display here that’s not a million miles away from the likes of Nintendo and stuff like Mario 64. A little more linear, sure, but that same magic is there. 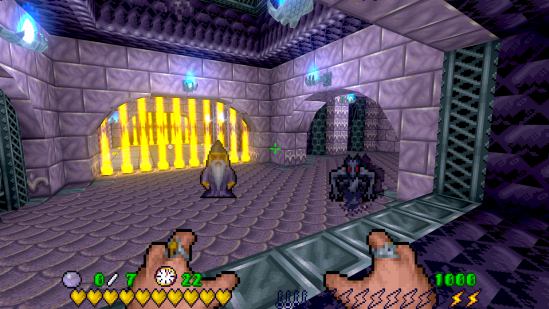 Enemies look and act the same as they did before, and their 2D behaviour has been masterfully translated into 3D. There is a definite pecking order to which enemies you should tend to first, and they spawn into view in exactly the same fashion as the older title – in a flurry of sparkles and stars.

And while you’d think that one weapon (mostly) for a WHOLE game would become tiresome, that just isn’t the case at all. The fairly constant power-ups reward your curiosity. Explore an area, find a secret, stumble upon a rapid-fire ability and suddenly a million enemies spawn in, giving you a fire-fight to remember. It’s all bout that ebb and flow. The quiet moments of exploration and platforming stand in stark contrast to the more intense moments of combat where the game indulges that itchy trigger finger.

Hocus Pocus DOOM is a cut-above, no question.

With the vast majority of DOOM mods, you can sit down and enjoy them, absolutely, but if you look long enough, the seams are easy to spot. You can tell exactly what was changed, and how it was done.

It’s not difficult to see where the DOOM ends and the mod begins.

Hocus Pocus DOOM blurs those lines. I personally think it does away with them completely. 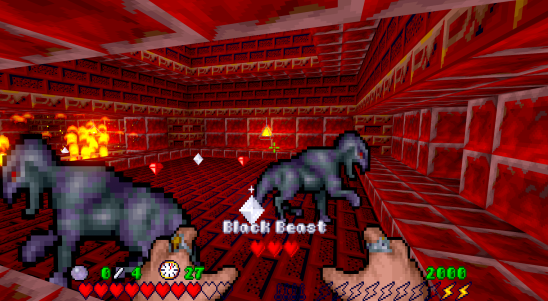 Indeed, it is in part down to the fact that the classic Hocus Pocus game-play loop I mentioned earlier fits the DOOM template almost perfectly. Yet, without the slick execution and amazing level design, it would mean nothing.

You could turn almost any property into a DOOM-like experience, and it will still hold a certain appeal. Alien Trilogy tried that years ago. It was essentially the DOOM formula with Xenomorphs, and despite being a valiant attempt, there were too many flaws to count. And that was a game that was being sold in stores.

Hocus Pocus manages to capture the exact essence of its source material, and not only replicates it’s formula, but one-ups it. It is, unequivocally, a better game than its inspiration – and all of this in a DOOM mod! 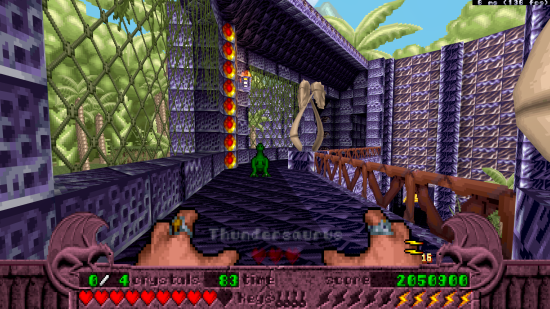 In fact, the only criticism I can fling in Hocus Pocus DOOM’s direction is that I dislike its name. It does the entire experience an extreme disservice. – this is Hocus Pocus 3D.

Also, I have one teeny-tiny admission of guilt to confess – I’ve not finished the fourth and final episode yet.

This is not because I’ve had my fill this time.

I just don’t want the game to end.

I absolutely FLEW through the first three episodes, and there is a LOT of game here. There’s apparently some new levels coming in the future, ones that as far as I can tell, are original. Like an expansion pack that the original game never got. Once there’s more, I may yet bring myself to finish Episode Four, but I don’t know if I can cope with knowing I’ve reached the end so soon. 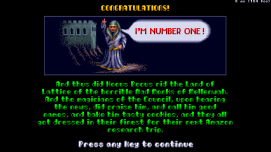 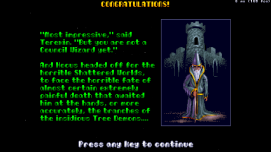 There’s always the re-playability factor. I definitely haven’t discovered all the secrets in my first run through it. There’s a stack of original bonus levels, of which I’ve only found a handful. Still, I’d like the air of mystery I associate with my Hocus Pocus DOOM experience to hang around for a little while longer. I might save it for that one rainy day we’re all waiting on. You know the one.

It’s free, exceedingly clever, and is the rare tribute game that manages to top its inspiration. 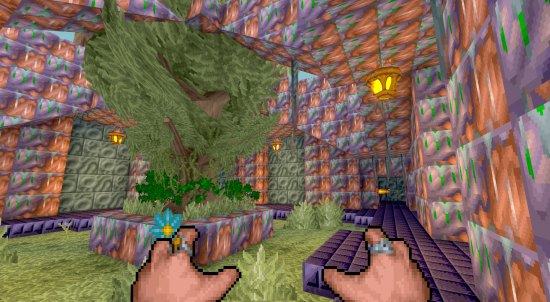