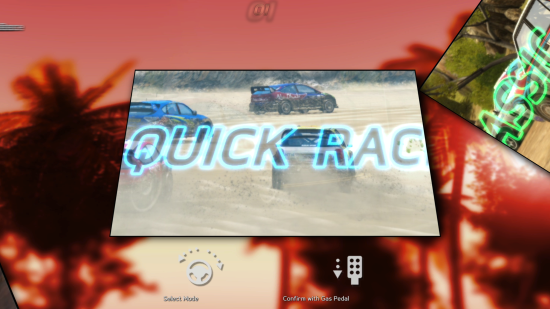 I received a couple of requests for this one, so here it is. Your complete guide to getting SEGA RALLY 3 ARCADE RUNNING ON YOUR WINDOWS 10 PC with TEKNOPARROT.

DISCLAIMER: I won’t be linking the SEGA Rally 3 Arcade dump in this tutorial. You’ll be needing it to play the game.

Linking it would be wrong, and I don’t want to get shut down before I even really get started. A quick Google Search will get you almost all the way there, so search for ‘Sega Rally 3 8’ at your own risk.

This tutorial is for EVERYTHING AFTER THE NAUGHTY STUFF, and assumes you’ve got the SEGA Rally file.

I’m gaming on a Windows 10 PC, so I’ve verified that it at least works on that. Let me know if you guys have any issues, but do take note that I have no way of knowing if this tutorial will work on other versions of Windows other than Windows 10

I’ve tried my best to zoom in on all the pictures here when needed, but in case you need to see it bigger, each image can be opened in a new tab or window, and you’ll be able to view them in their full-sized glory.

First up, you’re going to want to download TeknoParrot. 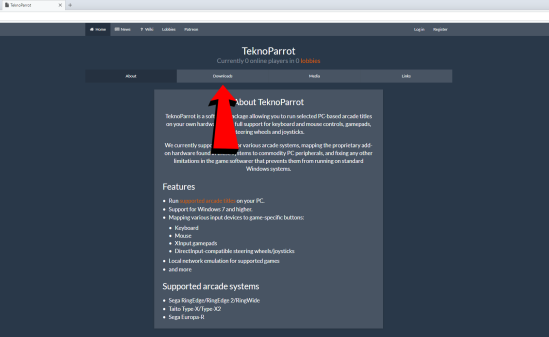 You’ll be taken to the TeknoParrot Download page. This will show the latest public release of TeknoParrot – in this case, the build is version 1.33. 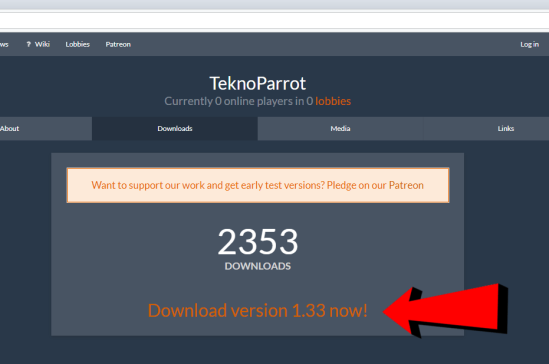 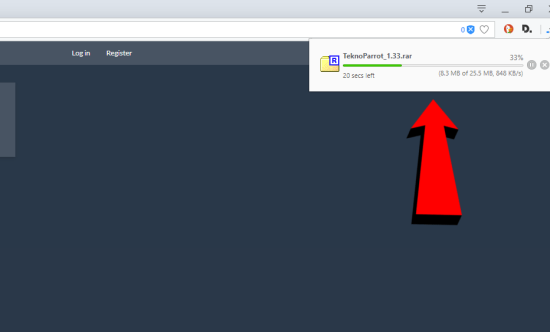 I’ve moved TeknoParrot_1.33.rar to my Desktop to make this tutorial easier to follow: 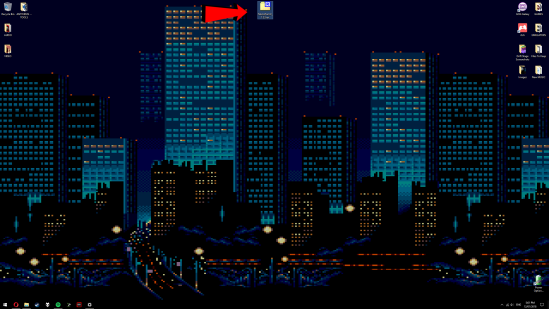 You can extract TeknoParrot_1.33.rar in one of two ways:

You should end up with a folder called TeknoParrot_1.33 – it looks like this:

This is all you’ll need to do to get it running. TeknoParrot doesn’t need to be installed in the traditional way. 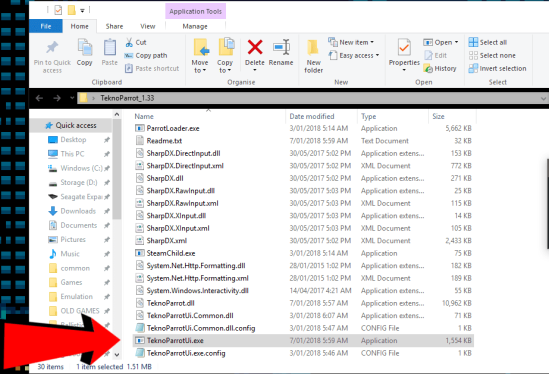 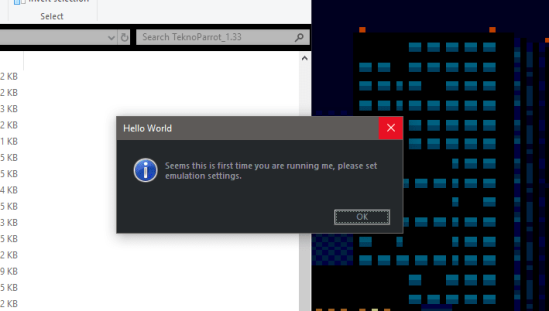 You’ll see this when it’s open: 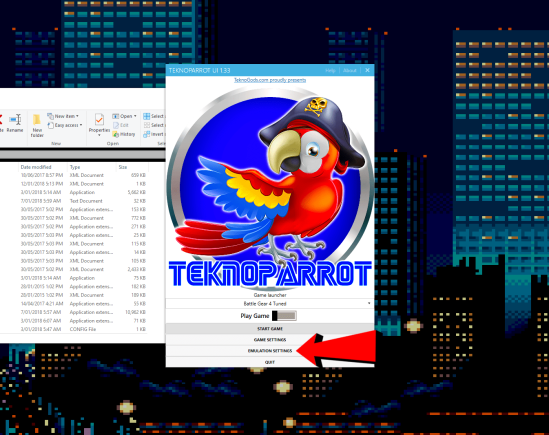 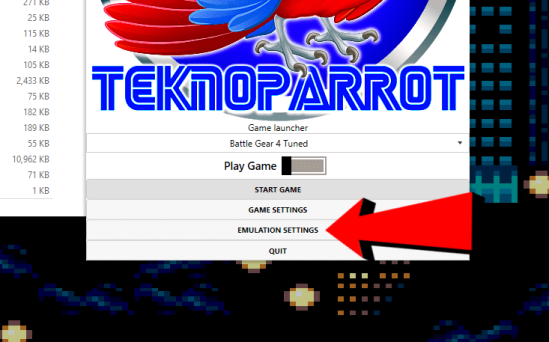 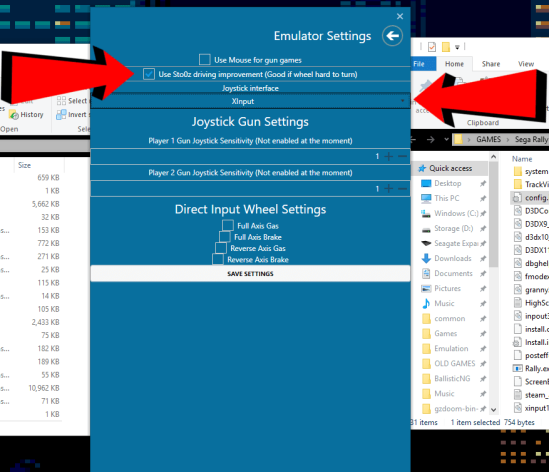 As suggested in the picture above:

I chose XInput. Use this if you’re going to be playing with a Xbox 360/Xbox One gamepad. I am personally using a Playstation DualShock 4 gamepad via DS4Windows (a program that remaps the PS4 controller to the Xinput standard). DirectInput is an older standard, and as such, is for older PC gamepads/joysticks.  If you’re rocking an older gamepad, choose DirectInput. 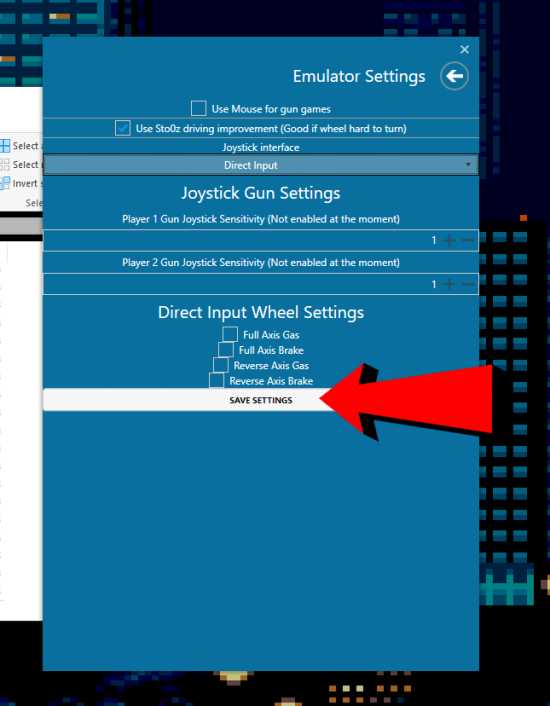 A message box should pop up. It says ‘Generation of ParrotData.xml was successful, please restart me!’ – it looks like this: 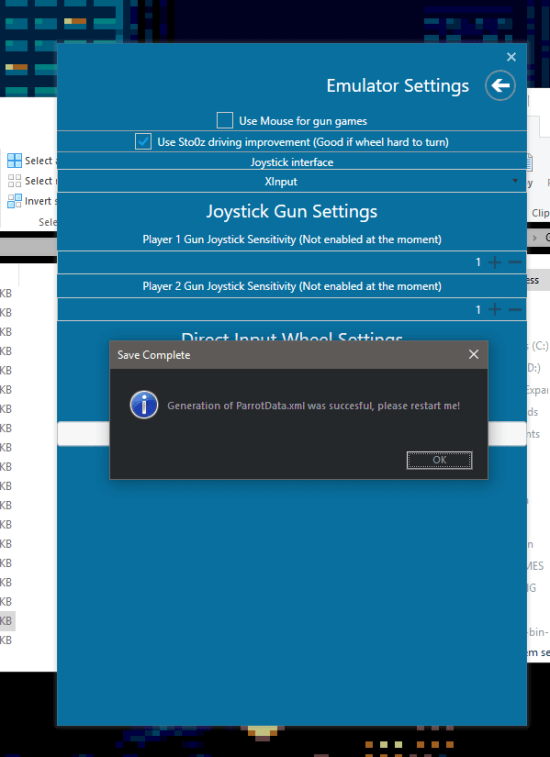 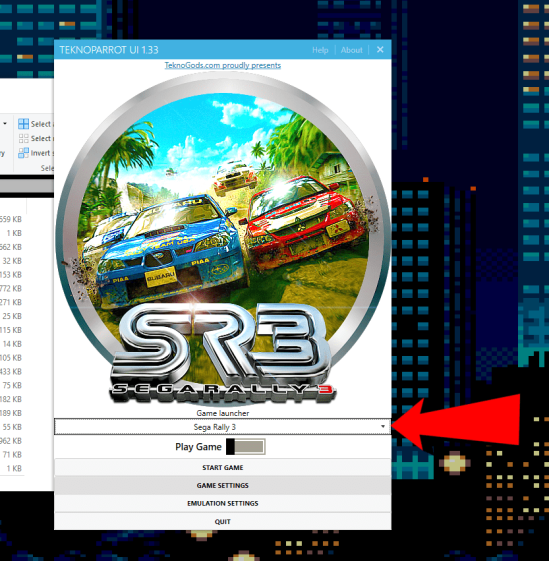 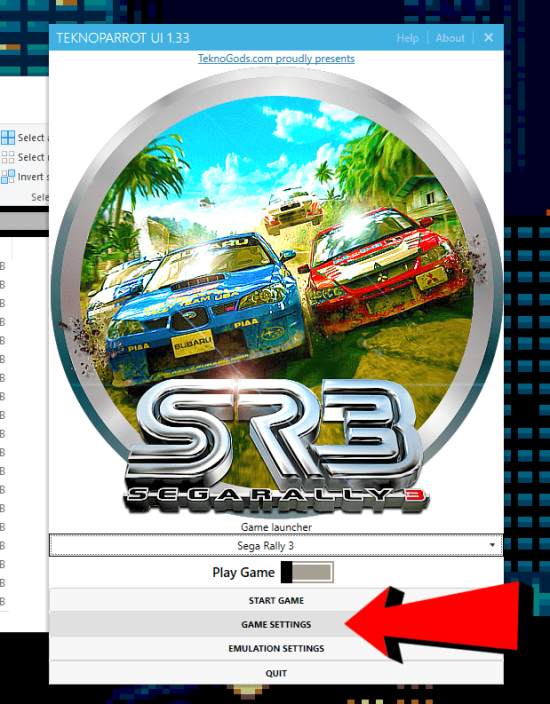 It will take you to a screen that looks like this: 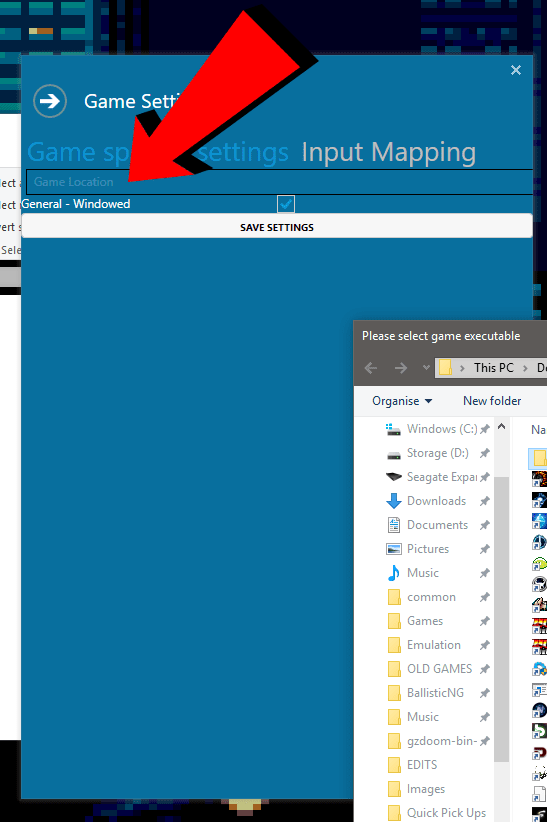 The file that TeknoParrot wants is called Rally.exe, and it’s found in the main Sega Rally 3 folder that you should already have. NOTE – This is the folder that contains the SEGA Rally 3 Arcade files I warned you about at the beginning of the tutorial. You’ll need to have this Sega Rally 3 file already downloaded and ready to go to continue.

In Sega Rally 3 main folder, you should have 3 more folders – Rally, Shell and ShellData.

This will take you back to TeknoParrot, and your path to Rally.exe will be displayed in the box. 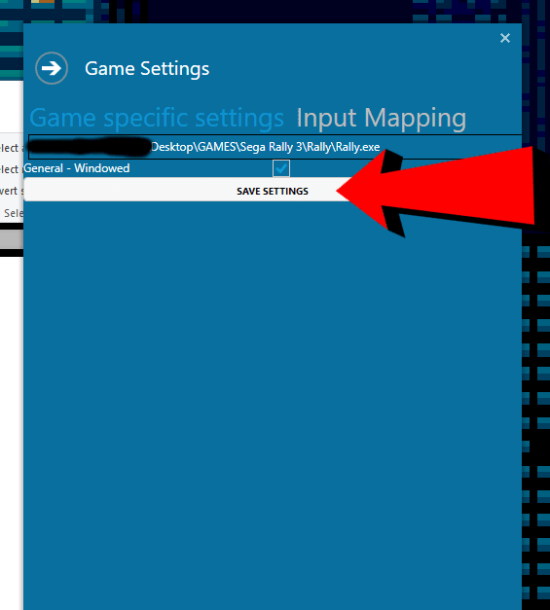 A message box will pop up that says ‘Generation of SR3.xml was successful’ – it looks like this: 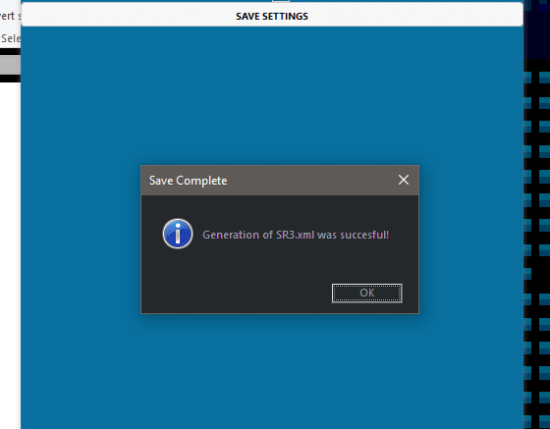 After telling TeknoParrot where to find SEGA Rally 3, you might want to take time out to edit the config.ini in your Sega Rally 3 folder, and set your screen resolution options to your liking.

In the main Sega Rally 3 folder, you should have 3 more folders – Rally, Shell and ShellData. 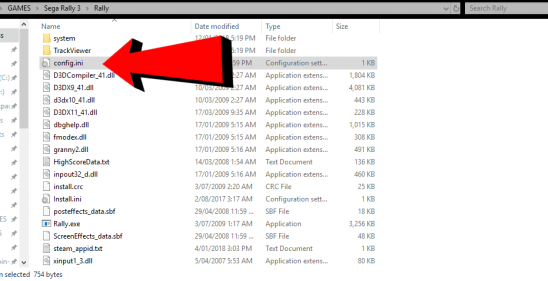 NOTE: If you’re new to this kind of thing, you may want to make a copy of the config.ini. Place the copy in a folder/place you know to be a safe place to store things on your PC. This way, if you do muck anything up, then you’ve got the original file backed-up and ready to replace your broken one.

Once the file is open, you’ll see this: 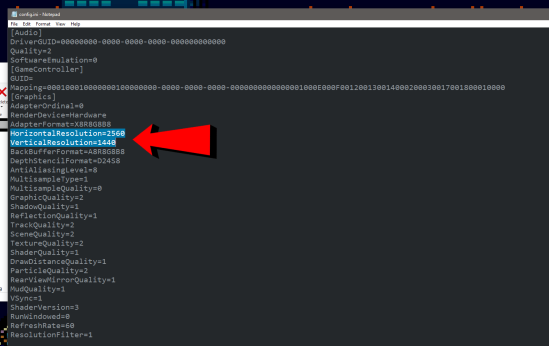 If your monitor is, say, a 1080p panel, then those two text lines should match your monitor’s native resolution of 1920×1080. You’ll be editing the file to like exactly like this: 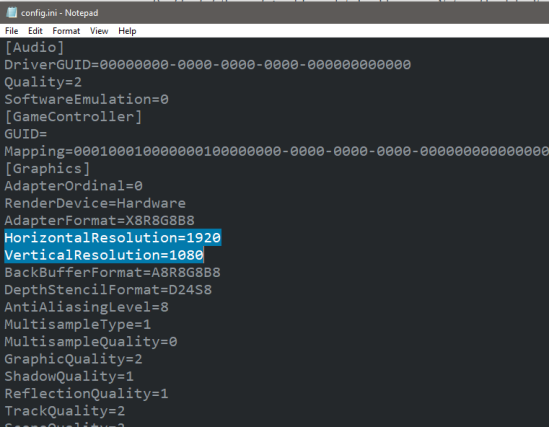 Make sure to save your changes to the config.ini before you exit/close Notepad. This will essentially apply the resolution changes you have made, and SEGA Rally 3 will run in the resolution you have specified.

SETTING UP YOUR GAMEPAD INPUTS:

It should go without saying that you’ll need a controller hooked up and ready to go for this section.

Also, SEGA Rally 3 doesn’t like the default DS4Windows settings for the analogue triggers/axis. So if you’re using a Playstation Dual Shock 4 like I am, here are the settings I use for SEGA RALLY.

***Feel free to ignore this bit if you’re using Xbox 360/Xbox One gamepads. Skip straight to the bullet-point under the image below. 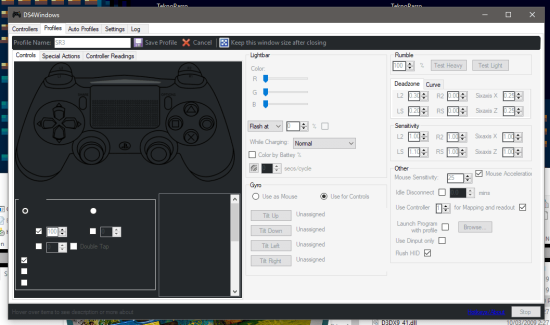 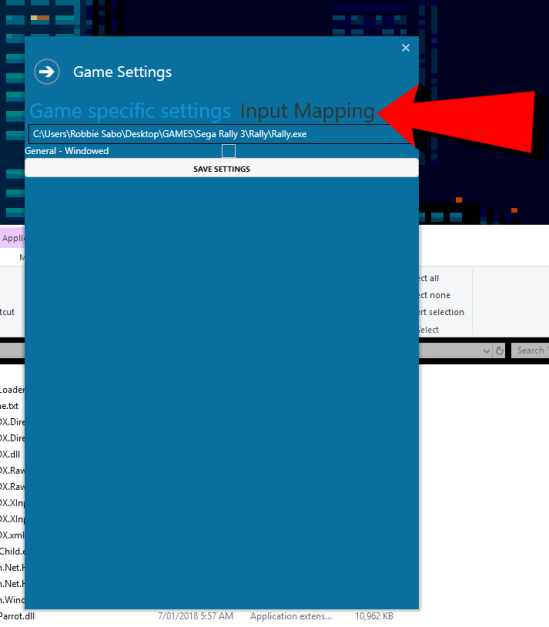 Here, you’ll map all your desired buttons, triggers and axis as you see fit. It’s easy as pie: 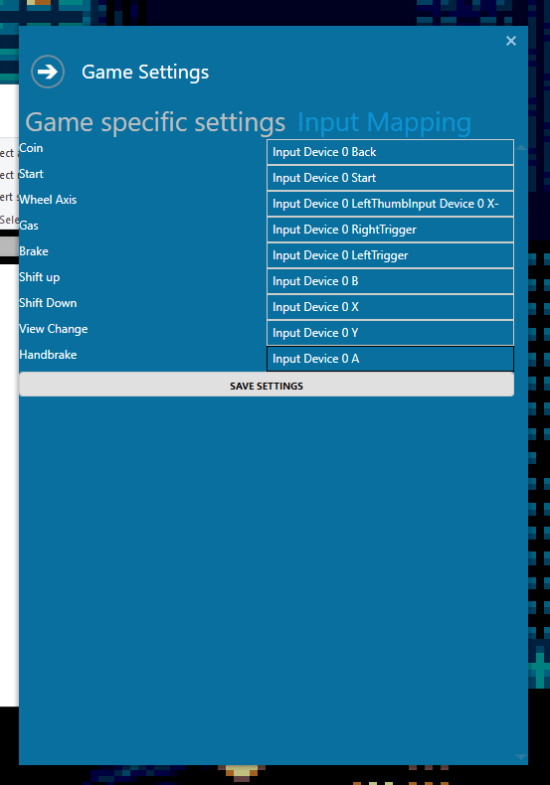 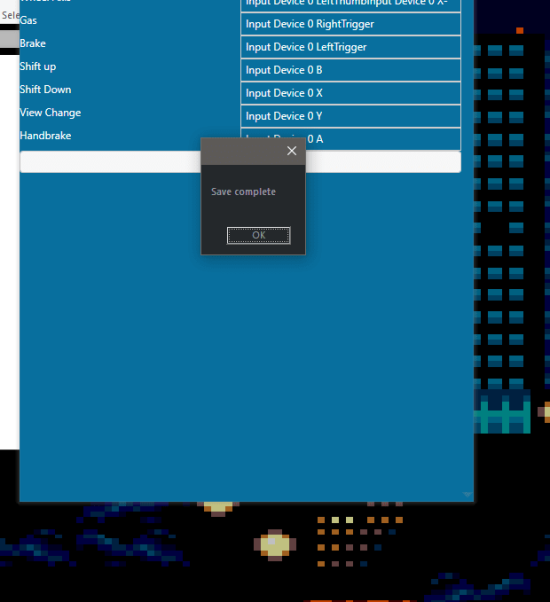 THE FUN PART – GETTING YOUR SEGA RALLY 3 ON: 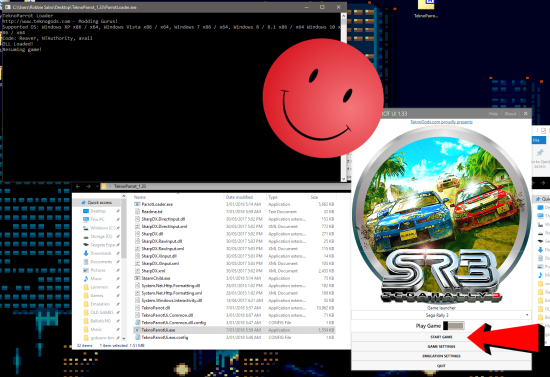 After a quick boot sequence, you’ll be in-game, and parked on the main menu – free to play the game to your heart’s content! 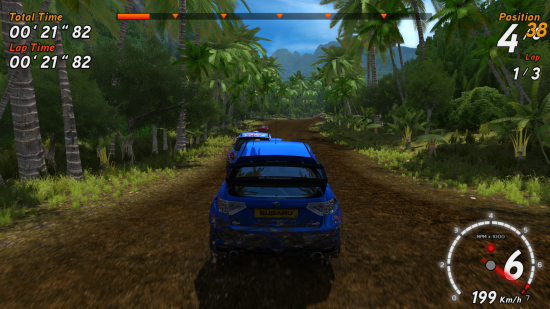 Well, that’s the end of that! I’ve followed this tutorial twice over, so I’m 100% confident it will work for you too. Well, maybe 99%, since PC’s can be fickle beasts at the best of times.

If you enjoyed this tutorial, and it worked for you, let me know! This took me forever to do, and I loved every second of it. If something needs improving, make sure to tell me.