A new Retro FPS? Is the Saturn Wheel a must-have peripheral for racing fans? And what Nintendo Switch Indie Game made my blood boil this week? READ ON!

I’ve been working all week, so the posts haven’t been coming out as often as I’d like. I’m back to my normal roster as of next week, so yay – MOAR GAMES!

LINK TO THE HELLSCREEN KICKSTARTER HERE!

Ion Maiden. DUSK. AMID EVIL – the 90s First-Person Shooter is back in a big way. Will there be another instant-classic to add to that list? I sure hope so!

HellScreen is the latest Retro FPS to catch my attention.

Hellscreen is a single-player, level-based FPS, in the fast, frantic style of classic games from the 1990s (such as Doom, Quake, Unreal)

Sounds pretty good, no? I thought so – enough to back it, at least. What struck me straight away was the colour scheme and low-res pixel look. I’m loving this colour combo… Red and Cyan look really awesome together, in a sickly kind-of way.

I do wish that the trailer featured more of the promised ‘level-design’, because as it is, it just kinda looks like Devil Daggers. Which I think is a mistake that could lead to a failed first attempt at a Kickstarter campaign. Of it’s AU $44765 goal, the game is, with only 12 days to go, sitting at AU $7723 . A real shame, because what has been shown is very, very promising. I’d really like to see a video of some gameplay turn up in an update – I think that might help secure it the funding it needs.

SHOW us that old-school level design.

Because if that’s the crowd that HellScreen wants attention from, then it will take more than that trailer to prove that the game isn’t just one of those throw-back games, like STRAFE, that says it’s old-school, but isn’t really.

Some really cool updates have been announced so far – a ‘graphics remix filter’ has been added, which allows the player to customize the visuals to their liking. I really like the OG colour scheme, but more options is never a bad thing.

Still, I think that what has been shown is kinda neat, and like I said, I’ve backed it. All the best of luck to the team, these last couple of weeks are going to be crucial – show us what you’re made of!

So this turned up on my doorstep. Well, not so much my doorstep, as at work, because I work at the Post Office in town. You catch my drift though, eh? 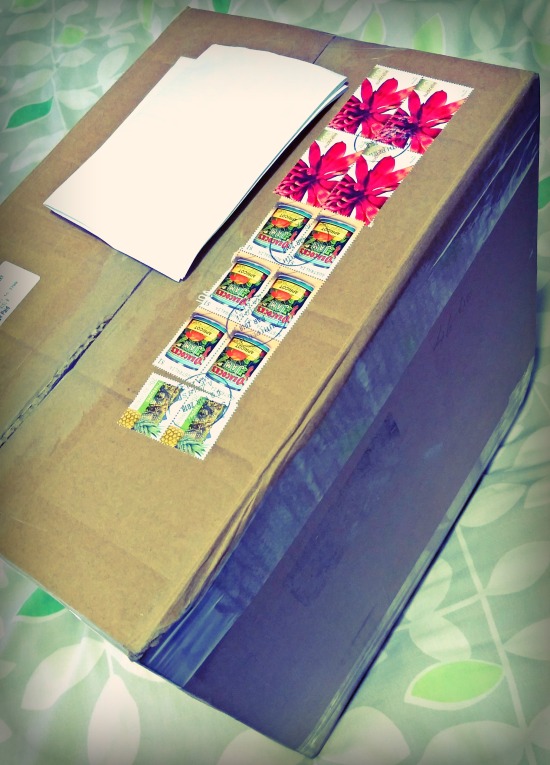 Yep, here it is! I’ve been waiting two-plus decades to own one of these, and it’s finally mine… ALL MINE!!! 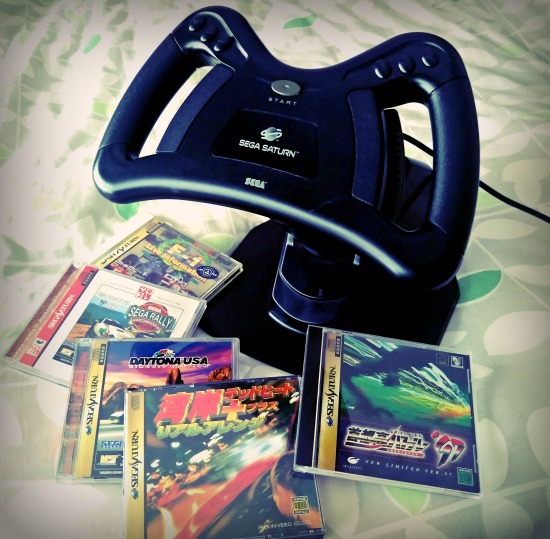 When it comes to console gaming, give me a great gamepad any day of the week, and I’ll be happy.

Having so many Saturn racing games though, one thing that I’ve noticed is that not all games support analogue steering, and some that do just aren’t tuned to the stick all that well. Games like SEGA Rally Championship Plus, Choro Q Park, Nissan Presents Over Drivin’ GT-R and Manx TT stand out, and play great with the SEGA 3D Controller. But many, many others, like Daytona USA Circuit Edition and Gran Chaser/Cyber Speedway are too twitchy in analogue mode, and too sluggish with a d-pad. 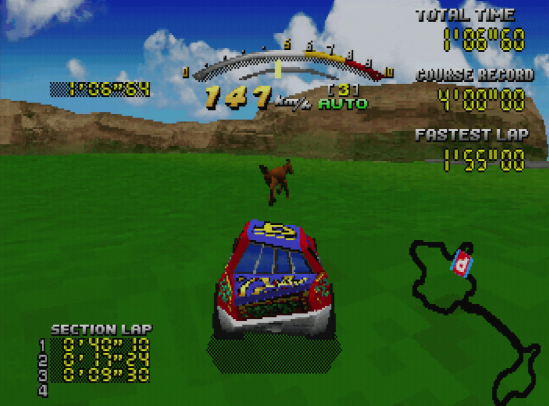 Chasing horses IS HARD WITHOUT A WHEEL. Fact.

Then there are games that just flat-out don’t feature any analogue steering options when using any gamepad.

Little known fact, though – almost every racing game on the Saturn supports the Arcade Racer Joystick. 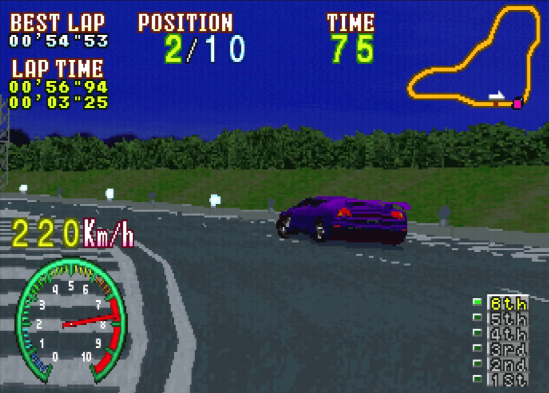 Out of the 40+ games in my collection, I’ve only come across 4 or so games that it doesn’t work with – Destruction Derby, Impact Racing, Sonic R (booooo, seriously?) and Road Rash are no-go’s. Everything else I’ve tried works! So far. There are a handful that I haven’t tried yet.

Regardless, my Saturn Racing Collection just got its most valuable addition yet. Almost every game I’ve thrown at the thing is improved one-hundred-fold, and I’m absolutely loving the new depth I’m finding in games that I didn’t know was there before.

I’ll be creating a master-list of Saturn Racing games, ranked in order of the Arcade Racer Joystick implementation. Some games benefit a lot more than others, and I’ll be sharing my finding with you guys at some point in the future.

In the immortal words of Mel C, my Saturn Racing Collection will… 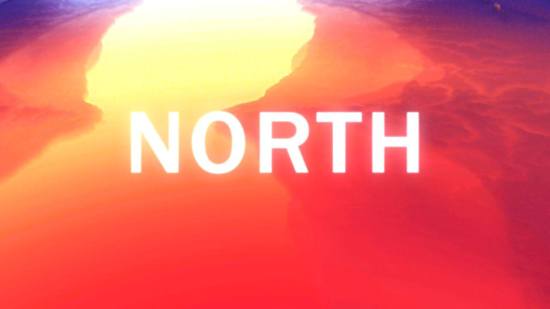 North was a game that caught my eye this week. I had a few extra dollars to throw at a couple of Nintendo Switch games, and NORTH looked pretty ‘aight. A walking sim that could be completed in under an hour? SIGN ME UP! Perfect bed-time fodder, and for AU $5, a no-brainer. 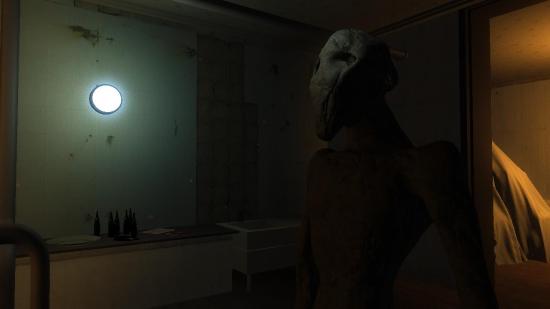 Upon booting up the game, you get this little message: 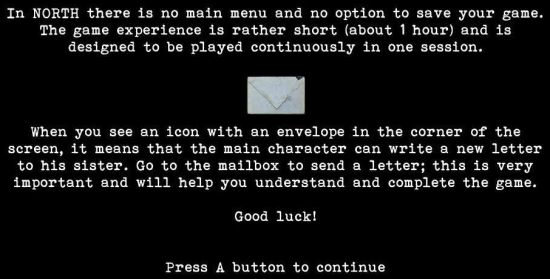 No saves? Cool! No options menu? Totally OK with that.

So I begin my game, and immediately, I notice that the right-stick is not inverted. No worries, I’ll just go into the options menu and change tha… wait. 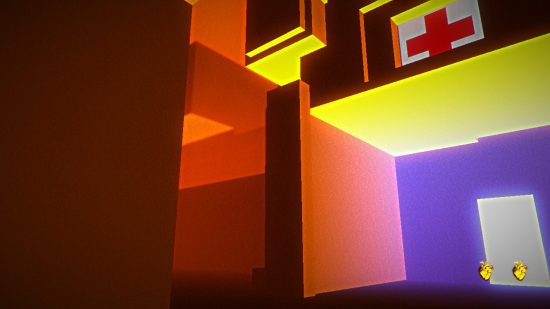 I’m not here to start a discussion about which is better. Like non-inverted controls? All good buddy – you do you. But I’ve always been an invert guy, and to have a game, in 2018, with no way to change this most fundamental of settings? 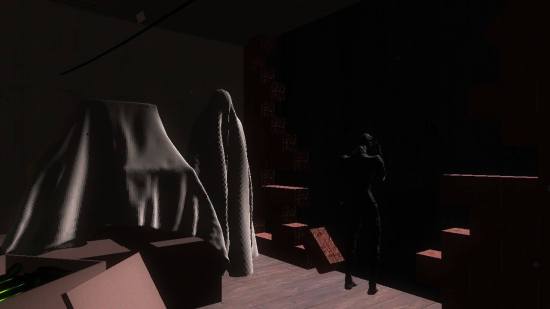 Until this is patched up, I quite literally can’t play NORTH, no matter how much I want to.

Which is a shame, because this super-stylised Cyberpunk world is one that I really wouldn’t mind spending an hour or so in. I wish I could tell you more about the game, but I can’t get over the control hurdles. Pretty poor form from developers Sometimes You, to be honest. 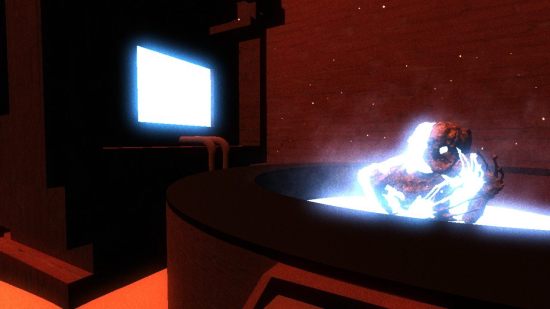 What are you guys playing? Any games out there pissed you off with their lack of accessibility options?

And holy shit. If you get this image, then chances are YOU’RE AS PUMPED AS I AM! 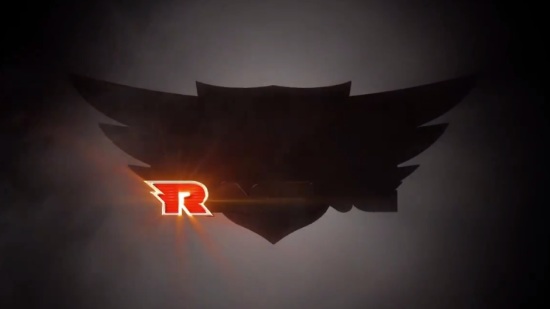 Sumo Digital, is that you???