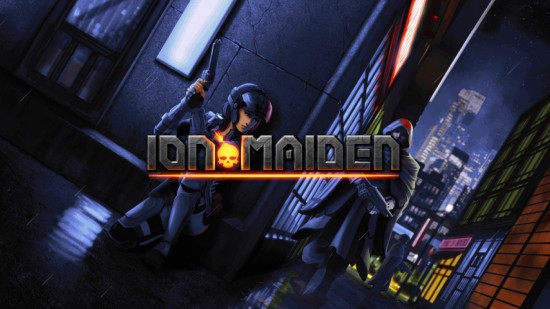 I fell off the First Person Shooter bandwagon looooong ago. Or at least I thought I had.

I grew up with the classics. Wolfenstein 3D, Blakestone, Zero Tolerance (yeah, it’s a classic to me), Exhumed/Powerslave, DOOM, Heretic, Hexen, Duke 3D, Half-Life and Quake changed my gaming world, and I followed the genre wherever it took me. PC or Console, it didn’t matter. Toward the tail-end of the Xbox 360 era though, the genre started losing its appeal for me. Online multi-player was the new focus, and the parts of the games I cared about (the not multi-player bits) were the exact parts of the game that seemed to receive the least amount of attention.

I haven’t enjoyed a Call of Duty game since the original Modern Warfare. Halo 4 was a big disappointment, and marked the point where I stopped caring about that series. The new DOOM was OK, but I much prefer Bethesda’s reboot of the Wolfenstein games. Seriously, The New Order and The Old Blood are near-perfect experiences as far as I’m concerned. I haven’t played much of The New Colossus yet, but I don’t doubt that I’ll love that one just as much. 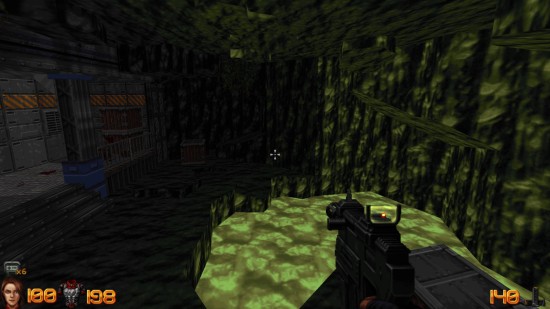 I’ve tried thinking about why my interest in the genre has waned so much. I say that, but in reality, I didn’t have to try too hard. As I said earlier, multi-player isn’t a draw for me. A good single-player component will always get me on-board, but they’re relatively thin on the ground these days. It’s all multi-player, multi-player, loot boxes and live services. Level design has seemingly been thrown out the window too. You only even seem to get either get open-world blandness, or shooters with about as many branching paths as a roller-coaster. Not my cup of tea, but I don’t begrudge those that like them. Well, maybe I do a little. I’ve stopped buying them to show my disdain for them, at any rate.

So just as I was ready to call it quits on the genre, I stumbled upon DUSK – a throwback to the Quake/Half-Life style of PC FPS. And it was glorious. It warmed my heart to see that there were people out there who wanted to see legit level design and proper action back into the FPS genre, so much so that they were willing and able to do it themselves. DUSK has some of the best level design I’d come across up to that point, and the movement and physics, whilst straight out of 1998, are satisfying to, well, just play.

Since DUSK, a whole slew of throwback shooters have been added to the list. AMID EVIL looks like a really nice take on the Heretic/Hexen style. STRAFE was less successful. It meant well, but it didn’t really get what made those old games work. Procedural generation and rouge-like elements? No thanks.

Which brings us to Ion Maiden. Developed by Voidpoint (composed of various members of the EDuke32 community) and published by the one, true publisher for a game of this ilk, 3D Realms, Ion Maiden perhaps goes one step further than even DUSK.

You see, Ion Maiden is built within a source-port extension of Ken Silverman’s BUILD engine. Having powered classics like Duke Nukem 3D, Blood, Shadow Warrior and the PC version of Exhumed/Powerslave, it’s a fitting choice, for sure. It’s also a follow-up to an over-head action game called Bombshell. I’d tell you more about it, but I’ve never played it, and from the looks of it, it doesn’t look like I missed out too much – the reception to Bombshell was fairly chilly. Still, pilfering the main protagonist and world from Bombshell, Voidpoint and 3D Realms take a second shot at the IP by re-inventing it in the best way possible – a throwback retro FPS with all the 90s attitude you could ever want. 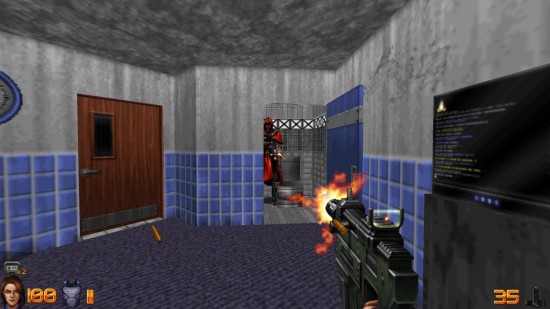 This Early Access release is a stand-alone episode of the game, with the full release scheduled for Q3 2018. I liken this Early Access period to a Shareware episode, in so far as it’s polished, complete and self-contained, yet more of a demo and a glimpse into what the full game promises to deliver.

And really, having now played it for myself, it’s hard to argue against any of these points. The Ion Maiden Early Access is, in all likelihood, the best classic shooter you’ll play all year. Hell, for my money, it’s the best FPS game I’ve played in a decade. And it’s a demo! 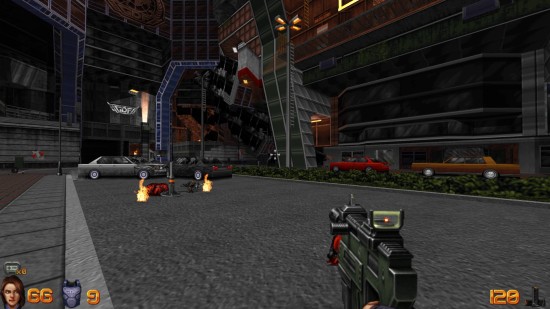 Set in a very cool, very particular 90s brand of Cyberpunk future, Ion Maiden impresses straight out of the gate. It obviously apes the graphical style of the older Build Engine games, but there’s no getting around the fact that the game is simply gorgeous. Featuring detailed textures, killer enemy sprite work, fantastic explosions and a million other smaller details, Ion Maiden begs you to just shoot stuff. It doesn’t matter what. Shoot the bad guys. Shoot that beer bottle. Shoot that phone, computer, bin, whatever – each object reacts differently thanks to a modern physics engine running underneath the retro facade. This level of interactivity is a clear homage to the games that inspired Ion Maiden, but it rises above the nostalgia by constantly rewarding your curiosity. Shoot random shit, and you can expect to find power-ups, ammo, secret areas and armour bonuses.

Gotta shoot it all. Brilliant. 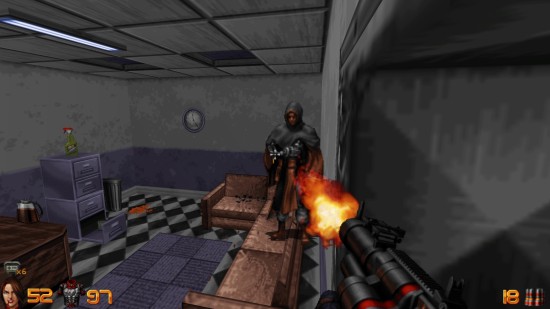 And shooting all the shit is something you’ll definitely want to do, because the gun-play is amazing. It’s tight, incredibly punchy and the weapons are perfectly balanced. This early episode of Ion Maiden features an Electric Baton melee weapon, along with a Revolver, Semi-Automatic and Shotgun. Each gun feels just as it should, and deal massive amounts of damage when used correctly. The Homing Grenade compliments your arsenal well, and is a satisfying way of laying waste to groups of enemies at a time. You roll it like a bowling ball, and it will seek out enemies on its own. Should it find one? BOOM! If it doesn’t, if won’t explode and you can pick it back up to use again. Fantastic stuff. 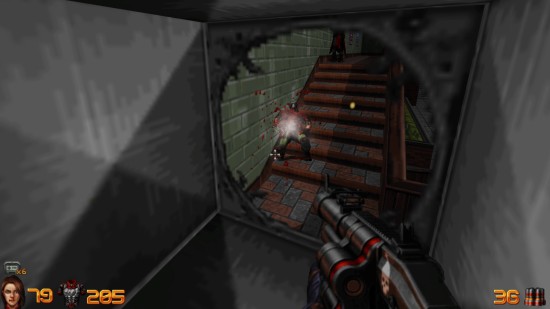 The level design, too, is stupendous. You’ll travel through big, open areas filled with bad guys, yet stray from the path and enter a building, and things become more like a corridor shooter, with enemies waiting around every corner. Shoot that vent you see above you, and you’ll uncover a vast network of tunnels in the walls – all leading to something good. It’s been done before, but the way Ion Maiden makes it all work together is flawless. There are coloured key-cards to find that will, naturally, grant you access to new areas. A genre staple, yes, but thanks to some really thoughtful design, you’ll rarely ever have to double back too far to get to the next area. But boy, are these areas that you’ll want to search every inch of regardless! Thick on atmosphere and with layouts that make sense from both a gameplay standpoint and arcitecturally, they feel like places that actually exist. That’s what these old FPS games got right – they felt like video games, but think back on a level, and you can basically walk through it in your head as though it were a real place that you’ve actually visited.

Enemy AI is about what you’d expect, but can surprise on occasion. The Cyber Punks in Ion Maiden basically only exist to get in your way (and in the way of your gun) and sap the health out of you. Which is great, because this is a video game, and mowing them down feels marvellous. As simple as the enemies may be, they don’t just blindly charge at the player. Expect them to take cover behind objects in the scenery, and they won’t come around a corner if you’re firing in their direction. When there are a tonne of them on-screen, you’ll want to take advantage of the available cover yourself, and a cautious approach is recommended. Especially on higher difficulty levels, since these guys can pack a serious punch, and pretty much appear out of nowhere. They don’t spawn out of thin air, that’s not what I’m saying, but I have experienced a few monster-closet-y scenarios. Like in any old-school FPS worth its salt, be wary of an armour pick-up or gun out in the open. 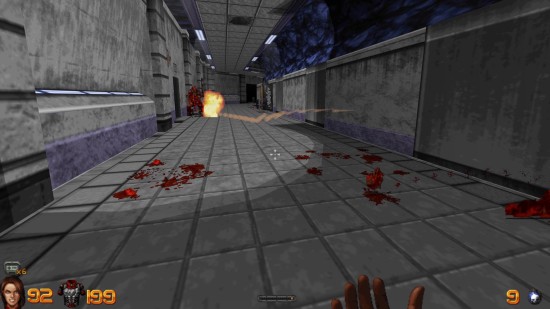 A feature that I thought was cool was that the vast majority of the bullets the enemies shoot at you are physically modelled, so you can see them coming and stand a good chance of avoiding being hit if you’re quick enough on your feet. It’s not realistic, sure, but it is fun, and adds a certain level of strategy to the core gameplay loop. 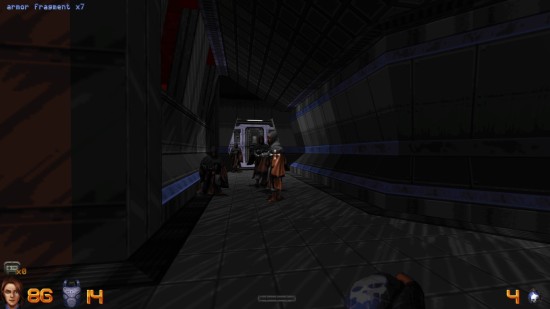 I touched on the visuals earlier, but I do have to again mention the outstanding art direction in the game. Not only are the levels easy to read, but Ion Maiden captures that 90s Cyberpunk spirit like almost nothing else. Enemy and the general character designs are exceptionally well drawn, and look straight out of a 90s cartoon. The environments also shine – it’s all ‘edgy’ iron and steel, punctuated by bright, bold colours and neon in general. Explosions are magnificent too, and you’ll be seeing a lot of them, since almost everything in Ion Maiden explodes. As it should – Build Engine games always did do the ‘splodey stuff well.

Another thing that is exceptionally well realised is the audio. Sound effects are of a high standard, and the vast majority sound like they were pulled directly from the games preceding it, even though they’re all-new. But that music. Phwoar. Not only is the music in Ion Maiden outstanding from a musical point of view, with catchy melodies, 90s beats and a sinister electronica vibe. They’re also legit tracker tunes. What are tracker tunes? Think the Amiga. Think the MOD music from Deus Ex and Unreal. Think Epic Pinball and Jazz Jackrabbit and you’re on the right track. This is awesome, and even better, what’s here in Ion Maiden benefits from all the technological leaps the tracker format has made in the last 20 years. I’m a sucker for 90s Cyberpunk music, and this ranks right up there. Perfect. 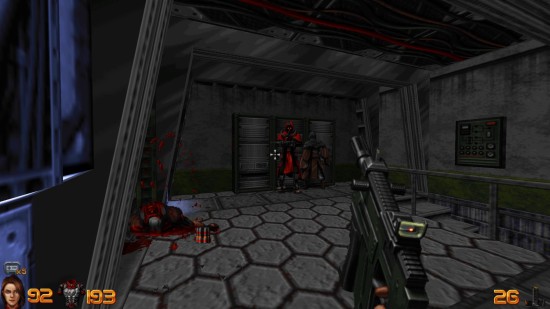 My only real qualm with the game so far is that performance can be a little spotty. I’m not sure if it’s because I was capturing footage at the same time, but regardless, every time I’d walk through a loading area, my game would slow down to a crawl for a second or two. Large, open areas with lots of enemies, explosions and gunfire also resulted in minor slowdowns. Again, I was capturing footage at the same time, but I’ve not run into this problem before, even whilst recording gameplay in similar source-ports like GZDoom, let alone in EDuke32. It’s something I hope is addressed, but really, these hiccups are fleeting at their worst, so it’s not a big deal. 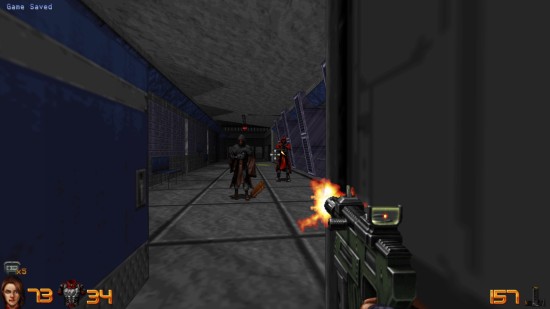 Ion Maiden has shot straight to the top of my most-wanted games of the year, and if this generous demo is any indication, then the final product will go down as one of the greats. It’s more than just a nostalgia grab, despite the talky protagonist and old-school aesthetics that pander to the crowd. Every square centimetre of the game is a joy to explore, the level design is some of the best I’ve ever seen, and the action is relentless and moreish. I struggled with putting it down long enough to write this article. Needless to say, I’m really, really looking forward to the full release later on in the year. 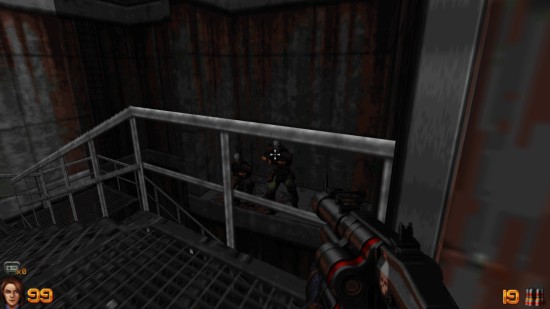 Don’t let the Early Access put you off. If you were EVER to make an exception for an Early Access title, make it Ion Maiden. You’ll thank me later. 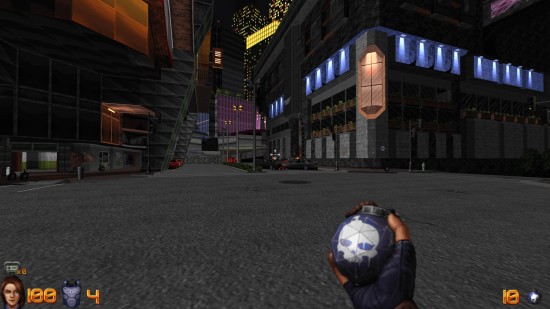